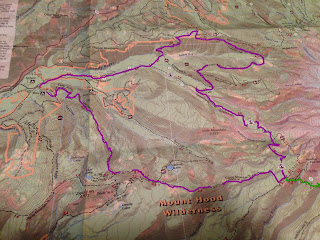 To get in a run at altitude, and for a change of scenery, Ann planned a day-off run for us up on Mt Hood. It was also a chance for us to try out gear for our circumnavigation of Mt Hood: a water pump, folding poles, and food.


We started out near Riley Horse Camp, and ran a dry, sandy trail across the river and onto the Pacific Crest Trail, where the first of three major climbs began.


Bald Mountain was our first summit, which we ran last August. Of course Ann also ran it much more recently.

I remembered that climb well, so I wasn't surprised when the two and a half miles seemed to really stretch out. At the top of Bald Mountain, the sweeping view of Mt Hood and alpine meadows makes the memory of the climb melt away.

Then there are the river crossings, which were much easier with the poles. Of course, the Mt Hood Scramble last year gave us lots of experience crossing snow-melt rivers, but having a pole handy means you don't have to hunt down a stick.

Our next climb was up to Paradise Park, which really kicked my butt. I walked most of it. Near the top, parts of it were sandy and wide open, which felt really tough. At the top we saw some snow-- even ran through a bit across the trail-- and had our second picnic. I really needed it, and we were tired enough to be giddy.

After a refreshing stretch of downhill, we came to our third and final climb: East Zigzag Mountain. Knowing it was the final uphill, I was able to pull a bit more out, but the altitude really got to me. When we got to the top and enjoyed the spectacular view, I was ready for the final descent to the car.

And it was worth it! Although it felt like quite a bit longer than we thought it would, it was nice to run again. We kept going down, down, down, and looking downhill all we could see were more trees and downhill. Then suddenly, we hit some sand and knew we were close.

We expected to come to a road and have a bit to run to get to the car, but there were no trail signs and the road was gravel-- not what we expected. With the shadows getting long, we stopped to look at the paper and phone maps, picked our direction, and started running again. It was painful at the end to run on road, but as soon as we saw the car we knew we had made it. We celebrated with a stash of orange juice and other goodies and headed home. It was a spectacular way to spend a day off!