By Ann Wallace - November 09, 2016
Four weeks ago I got a flu shot and almost immediately after I started to feel dizzy and tired. I left work early and went home and slept the rest of the day, the next day I only lasted at work for 2 hours. Over the weekend I started getting headaches and felt fatigued no matter how much I rested. I figured I was coming down with a cold or something. After a week of not getting better and having a mild headache all day I went to Zoomcare to try and figure out what was going on.

The doctor at Zoomcare told me she thought I had over training syndrome because I didn't take enough time to recover after CCC. I tried to debate this with her but it became apparent that she wasn't use to working with endurance athletes, so I dropped it. She conducted a normal exam and said it was possible that I was suffering from sinus headaches, but she still suggested I take 2 months off of running. She said no one wants to run in the rain anyways. UGH! I got a prescription for Sudafed and went on my way.


I was feeling so tired over the weekend that I skipped running the Columbia Gorge half marathon, a race that Susan I had run ever since it started 8 years ago. It was a struggle for me to even get out of bed. Sudafed and Advil didn't seem to help at all. I was still convinced it had something to do with the flu shot but wanted another opinion so I made an appointment with my primary care doctor, but it wasn't until Wednesday (5 days away).

It took all of me to make it through each day at work. I canceled plans with friends in the evenings because I couldn't imagine doing anything besides going home and going to bed and hoping that I would wake up in the morning feeling better. Susan said that a friend of hers had gone through something similar because of low iron levels and she gave me some iron supplements to take. I didn't want to take them until I talked to my doctor.

My doctor did a routine exam and said that everything checked out ok and that it was possible I was still suffering from side effects of the flu shot, even 2 weeks later. I mentioned the low iron levels to him and he said that it is possible and we could do a blood test. He suggested I go to acupuncture for the headache and take elderberry syrup in case my body was trying to fight something off. I was disappointed that he couldn't tell me what was going on but was willing to try anything he suggested. I was so desperate to get back to my normal self.

Luckily the next day I was able to get an acupuncture appointment at work, while it was relaxing it didn't seem to do anything. The acupuncturist suggested I start taking spirulina with carrot juice to help improve my energy level, especially since I am vegetarian. I also got my blood drawn and made a follow-up with my doctor on Monday.

The weekend sucked! I starting to get depressed because I didn't know what was going on and nothing I did seemed to help. I read about over training syndrome and adrenal fatigue but it seemed like the only symptom I had was fatigue. I also read about different types of headaches and my headache seemed similar to the description of a tension headache. Though tension headaches seemed to be brought on by stress and until all of this started, I was not stressed, life was really good. Reading about different headaches led me to search for headache specialist in Portland and I came across the OHSU headache clinic, but you need a referral for it. I was more than prepared with question for my doctor's appointment on Monday. 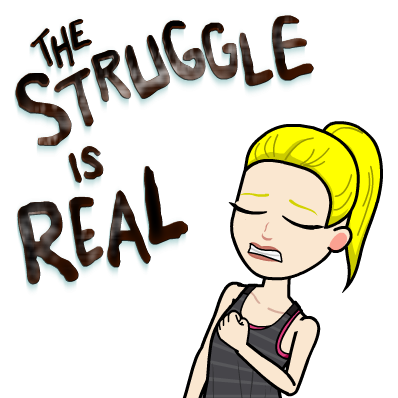 On Monday (Halloween), I had a massage which didn't seem to help my headaches, I pushed through work holding onto hope my doctor would have more information for me. As I waited in Dr. Shay’s waiting room I started to feel hopeless, I just knew my blood test was going to be fine and he wouldn't have any answers for me. Dr. Shay reviewed the first 2 pages of my blood results with me and everything was fine, then he turned to the 3rd page and said, “now for the bad news.” My ferritin level was really low.

Ferritin is the protein that stores iron, releasing it when your body needs it. Having a low ferritin means iron stores can quickly deplete, which can lead to an iron deficiency.


Dr. Shay’s bad news was actually good news to me, I was so happy to know what was going on. He was pretty confident that if I started taking iron supplements my energy level would improve and my headaches would go away. One of the other questions he asked me was about my periods, because heavy periods can deplete iron stores.  The last period I had was a lot heavier than normal, which was about the same time as my flu shot, when all of this started. Apparently I have the iron deficiency trifecta: female, vegetarian and an ultrarunner.

After getting home and reading more about iron deficiency, one of the other classic symptoms besides fatigue and headaches is shortness of breath doing normal activities. Ever since the Oregon Coast 50k, I have had a shortness of breath running, especially uphill but not the normal shortness of breath you getting going uphill. I also consider my diet pretty healthy, but after looking at the list of iron rich foods for vegetarians, I had not been doing a good job of eating beans and leafy greens.

I honestly don’t know why iron deficiency hasn’t been an issue before now, but I am happy to know what is going on and that there is a way to fix it. It has a little over a week since I started taking the iron pills and I still have a few headaches but my energy level is up. Hopefully in another week or so the headaches will start to disappear.