I was originally going to write 2 blog posts, one about our day off of work run and another about my year of recovery from a herniated disc. But the route I picked for our Gorge run was based on the route I created a year ago for a day off of work run which we weren't able to do because I ended up in the emergency room. So I thought it was appropriate to combine the two blog post into one.


I had intended to blog about my recovery process but as I started to get better and back to my normal activities my blogging fell to the wayside. The first 2 months post-ER I did a lot of hiking and spent 1-2 hours a day doing my PT exercises. My physical therapist was surprised how quickly I was recovering and within 4-5 weeks I was adding running back into my routine, albeit it slowly adding it back, but progress is progress. 3 months post-ER I was in Chamonix, France, running in the Alps and toeing the line at CCC. After CCC I spend a week with my family backpacking along the Rhein River.

I would love to report that it has been all rainbows and unicorns since then, but it hasn't. On the plane ride back from Europe, I did something which caused pain in my back and left leg, which I knew wasn't good. I was so scared I had fucked up my back again and was back to square one. I got a PT appointment as soon as I could and was back to doing basic PT exercises and taking it easy with running. Luckily, I was not back at square one and my dedication to doing my PT exercises paid off, but I wasn't back to 100%.

It has only been in the last 2 months that the day after a long run my back doesn't hurt or I feel really tight on my left side. My PT Ariel quit her clinic in December and I went a few months without seeing a physical therapist. During those 2 months I started to slack off on my PT exercises and I could tell the difference. I am fortunate that we have a wellness center at work with physical therapist on staff, I started seeing Colleen Little. I have been seeing Colleen once a week for the last 3 months and it has been great. Even if I haven't been in any significant pain for awhile, I feel like as an endurance athlete over 40 that PT and monthly massage is as important as getting in my long runs.

The other thing I started doing was taking a TRX and kettleball class at my gym with an awesome teacher named Tami, which has improved my back and core strength a lot. Ariel had suggested TRX to me and I was excited that our gym offered it. The class cost extra since it is a small group training class but it is totally worth it.


Since CCC, Susan I have run 2 50k races (Oregon Coast & Chuckanut) and all of Wildwood. We have run 20-26 miles countless times in Forest Park. My weekly milage is 40-50 miles a week, down a bit from the 60 mile weeks I was doing before I herniated my disc, I am also a little bit slower, but that is ok. Everyday that I can run I feel very fortunate, because after herniating my disc and reading stuff on the Internet I thought I would never run again.

There is still a risk that I could herniate the disc again, but that could happen by something as simple as lifting something up. I pay a lot more attention to my body when things don't feel normal and try and deal with it and just not assume it will go away or I can run through it. I am still paranoid anytime my back feels a little tight or sore, but I try not to let it overwhelm me.

This was suppose to be the year we run our first 100 miler, maybe next year. This year we are focusing on our adventure runs. Our first adventure run this year was in the Columbia Gorge. We have had an epic snowfall this year and the snow line was still around 3500 feet when I was planning our route. That is when I remembered that I had planned a route in the Gorge a year ago that we never ran.

*The modified new route:
415 Angels Rest to 420 - 4.8
R 420 Wahkeena to 441 - 1.2
R 441 Larch to 444 - 1.9
L 446 Multnomah Creek to 424 - .2
L 424 Oneonta to 400 - 5.1
R 400 Gorge to 420 - 4.2
R 420 Whakeena to 415 - 1.2
R 415 Angels Rest to car - 4.8
Total 24.2
We completely lucked out on weather, it was sunny and in the 70s. We started the climb up the Angels Rest trail and were quickly reminded that we had not been outside of Forest Park in awhile, it was a humbling climb to the top. We tried to run past hikers, because after all we are runners, we weren't fooling anyone.
Once we reached the top of the Angels Rest trail, it was nice and smooth running until we reached the Larch Mountain trail junction. As we started the climb up the Larch Mountain trail we were debating on rather we should do the original route and go to the top of Larch because it was such a clear day and we would be able to see all the surrounding mountains. About a mile up the Larch Mountain trail we ran into another trail runner who was coming down, he told us the last mile of the trail was covered in snow, but if we paid attention we could find the path. We decided to forgo going to the top and keep to the modified new route.


After about 30 minutes of running on the Larch Mountain trail I started to think we missed our turn off on trail 444, because according to my route it was only 1.9 miles to the junction. We pulled out the map and realized that it was actually 3 miles. Not sure how I screwed up the math. We decided to modify the route again, instead of taking Oneonta to Gorge trail, we took Oneonta to Franklin. So we were back on the original route.

We were having a great time running downhill on Franklin and Larch until we started reaching the crowds, but we relished in the fact that we didn't have to go all the way down to Multnomah Falls and deal with even larger crowds. Well that was until we reached the Perdition trail, which was closed. We had no other choice to but to go all the way down the Larch trail to Multnomah Falls, we silently made our way down as fast as we could.

From Multnomah Falls we ran on Gorge trail 400 to Whakeena to complete the original route. Despite some rerouting it was a great day on the trails, we both felt great afterwards and are looking forward to many more day off adventure runs this summer and fall.


*I have not modified the 2 routes above, use at your own risk. If you read the whole blog post you will note the mistakes in the routes. 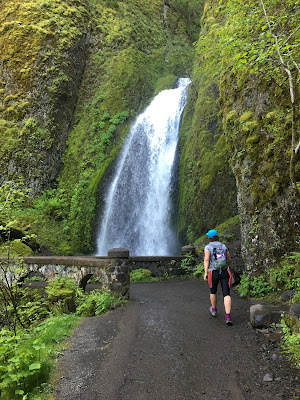