John and I had planned our last backpacking adventure for the summer in The Enchantments in Washington after getting a spot in the lottery earlier in the summer, but like many of our plans this summer we had to come up with a plan b because the trails were closed due to forest fires. We decided on Goat Rocks in Washington as our plan b, since neither of us had been there in years.

Our plan was to head up to Goat Rocks after I was done running and hike in and camp. Well, it snowed at Goat Rocks a few days before we had planned to leave. Instead of snow camping or coming up with plan c, we decided to camp in the Sprinter at the trailhead and hike the 13 mile loop in one day, snow permitting.

The lows at the trailhead were suppose to be in the high 30s, I was concerned about how cold it would be in van, since our new heater was in but not attached to the diesel line yet. I put fleece sheets on the bed, along with a Rumpl Puffy and a Pendleton blanket and packed all my puffy jackets. Luckily, I didn't need all the puffies, but it was cold enough to need all the blankets.

I woke up early made coffee and breakfast and we were on our way. The plan was to do the classic Goat Rocks loop, we were starting up the Berry Patch trailhead and going clockwise to Goat Lake and on to Snowgrass Flats. About a mile into the hike we hit snow, it wasn't a lot but I was surprised we reached snow so soon, I was expecting to get some around Goat Lake and that was it. It wasn't much longer before the whole trail was covered in snow. At that point I think we were 3 miles into the 13 mile hike and I was having my doubts if we would be able to complete the loop or even make it to Goat Lake, but we forged ahead.

Around the time the snow got to be more than a few inches, we ran into 2 backpackers who were heading out. We asked them how much snow there was and if was Jordan Basin, the high point (6600 feet), was passable. They told us there was snow pretty much the whole loop and it was really deep near Jordan Basin and Goat Lake, but it was passable.

They weren't kidding, was we continued uphill to Jordan Basin the snow got deeper and deeper. We also passed a considerable amount of backpackers, which I admired for spending the night in the snow. We slowly made our way over Jordan Basin, postholing and sliding but we made it and were rewarded with a snow lined Goat Lake and views of Rainier and Mt. St. Helens.

From Goat Lake it was all downhill to Snowgrass Flats and back to the van. Hiking 10+ miles in the snow was not what I had in mind for the end of summer trip, but it was a welcome surprise after a summer of forest fires. 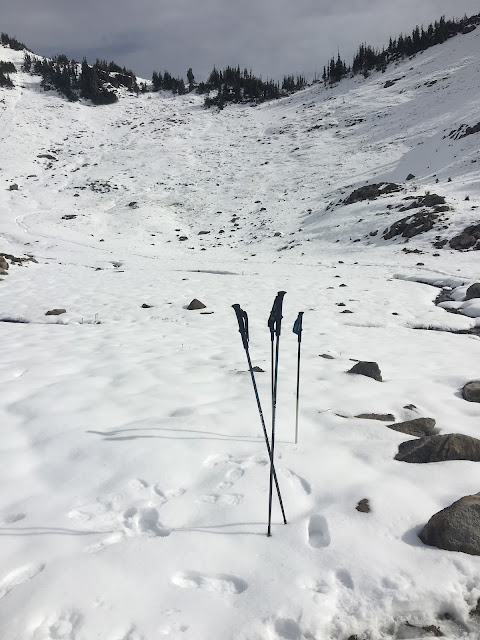 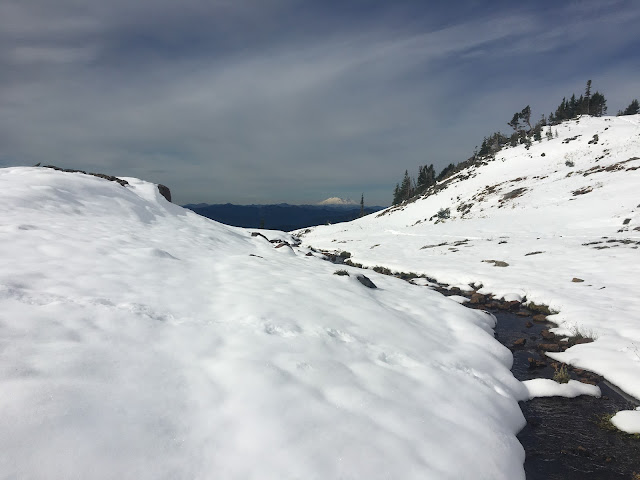