Day off run: Table Mountain and a crazy 5 mile loop

I have hiked Table Mountain quite a few times and never understood why anyone would want to run it. Mostly because of the unrelenting climb up heartbreak ridge and the scramble up the rocks at the end. 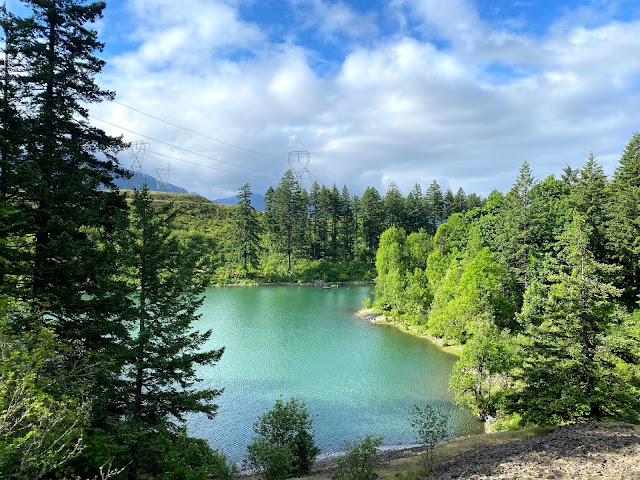 Susan and I had a day off adventure / training run planned for Friday, May 21st. I was hoping to do a 29 mile loop in the Herman Creek area but the snowline was still pretty low which didn't leave us with a lot of options. I gave Susan a few alternative options and the one she picked was Table Mountain, despite me warning her about the scramble at the end. To be honest I wasn't excited about the choice but she'd never been there before and I had never started the route on the PCT, so it was a new adventure to us both.

We got to the Bonneville Trailhead early and were the only car there. It was a nice and sunny day, we were pretty optimistic after our last adventures runs having horrible weather, especially Dog Mountain where we were in a rain cloud the whole time. After living in Portland for 20 years and exploring most of the trails within a 2 hour range it was really neat to be a on a new to me (us) section of the PCT. As we were running on the PCT we passed a few trail junctions, I took out my phone to look at the map and noticed an interesting loop we could take on the way back so we didn't have to do an out and back. We were both excited.

As we approached heartbreak ridge it started to get a little cloudier but I didn't think too much about it. We slowly made our way up heartbreak ridge and honestly it wasn't as bad as I remember, there are actually a few "flat spots". That being said, it is tough and not really runnable. Once we got to the rock face the sun had completely disappeared behind the clouds but we still started to make our way to the top. We were probably half way up when Cedar started to whimper and I started to think about how cold we were stuck in the rain cloud on Dog Mountain. We decided to turn around and go explore the loop we found.
Luckily it never rained and the sun came out again after we made our way down Table Mountain. As we made our way back on the PCT we turned off at one of the trail junctions on to less used trail. We followed this trail for a few miles and were pleasantly surprised to come upon a waterfall, which I later discovered is named Greenleaf Falls. After the falls the trail got harder to follow, but luckily I was able to track where we were going with my GPS & map.
Eventually the trail turned into what seemed like an overgrown and unused dirt road. Then we came upon some burned cars and other stuff, it was a little eerie. I kid and said what are we going to see next a meth house? Well not much further down there was an abandoned house, we were both like what the fuck. We were really confused if we were on someone's property or an actual trail. The trail / road eventually ended at a gate and a real road and hanging on the gate was a no trespassing sign, oops. Looking at the map there was supposed to be another trail at the road to take us back to the PCT.

After searching around for a bit we found another overgrown trail / road which followed the powerlines. Still not very runnable but at least we weren't on some sketchy private property. We slowly and carefully made our way back to the PCT laughing about our little side tracked adventure. We were both very happy to be back on the nice groomed PCT and were able to run the last few miles back to the van. This is one adventure we won't forget.