By Ann Wallace - November 16, 2014
Susan and I love Rainshadow Running races, so of course when we heard about the inaugural Oregon Coast 50k, we knew we had to run it. When I saw that the race was taking place in October on the Oregon Coast, I was a little skeptical, since that time of year the coast is notorious for bad weather (well really all Fall and Winter). But we had ran in plenty of races with bad weather, so what is a little rain on the coast?

The race took place on Saturday, October 18th. My sister came to Yachats with me and the house we rented was only a few miles from the start. The race didn't start until 9 am, which seemed so late and leisurely compared to most ultra-marathons. We did have to be at Adobe Resort in Yachats by 8:30 to check-in and take the bus to the start. After I checked in I heard my name, but it wasn't Susan, it was Kat. It was a pleasant surprise to see her, I had forgot she was running the race as well. As it was getting closer to 8:30 and people were loading up on buses, Susan was nowhere to be found. I grabbed her race bib and started to head over to the buses with Kat, then we finally saw Susan.

As we drove the few miles to the start the wind and rain started to pick up, which wasn't thrilling anyone, since the first 7 miles of the race were on the beach. We got off the buses and tried to find some shelter from the rain and wind while waiting for the race to start. Finally James (RD) made his announcements and told us to watch out for sneaker waves and off we went. There really isn't much to say about the 7 mile beach stretch except, holy hell did the headwinds suck! The rain was manageable, but I was glad when we finally made it to the Adobe Resort and were off the beach and able to change into dry shoes from our drop bags.


From the Adobe Resort we ran on the road through Yachats for a few miles before we entered forested Cape Perpetua, where we would run a 9 mile loop before heading back to the finish line. The elevation gain of the whole 50k was around 4000 feet, which made it pretty runnable. The highest point was around 1500 feet, so all the climbs were very manageable. I am use to Rainshadow Running throwing in some tough (mean) climbs. There were some sections of the trail that were pretty muddy from all the rain and there were a few times I felt like my shoes were going to get pulled off. But overall I think this was a great course.

Once the weather started to clear up Susan and I decided to change into our dry shirts, which we just happened to bring the same shirts, our shirts from The North Face 50k in San Francisco. I really hated the fact that we looked like twins, like some sort of bike team. Susan took great pleasure in knowing that I didn't like the fact we matched.


At some point Susan ate some Pocket Fuel with caffeine in it and started hauling ass on the downhills, so much that I couldn't even keep up with her. I made the mistake of over doing it in a weight class 2 days before the race, thinking we were only running a 50k. Even though she was far enough ahead of me, people still noticed that we had matching outfits, I passed some spectators at the Cape Perpetua Visitor Centers they told me my team mate was only a few minutes ahead of me. Ugh!
I finally caught up to Susan at the 24 mile aid station, well she waited for me at the aid station. I have to admit it was a little humbling having Susan waiting on me. She told me if we got going we could break our 50k PR. But I needed a break and to use the bathroom. Even though I was not keeping up with her, I felt like I was really pushing it. 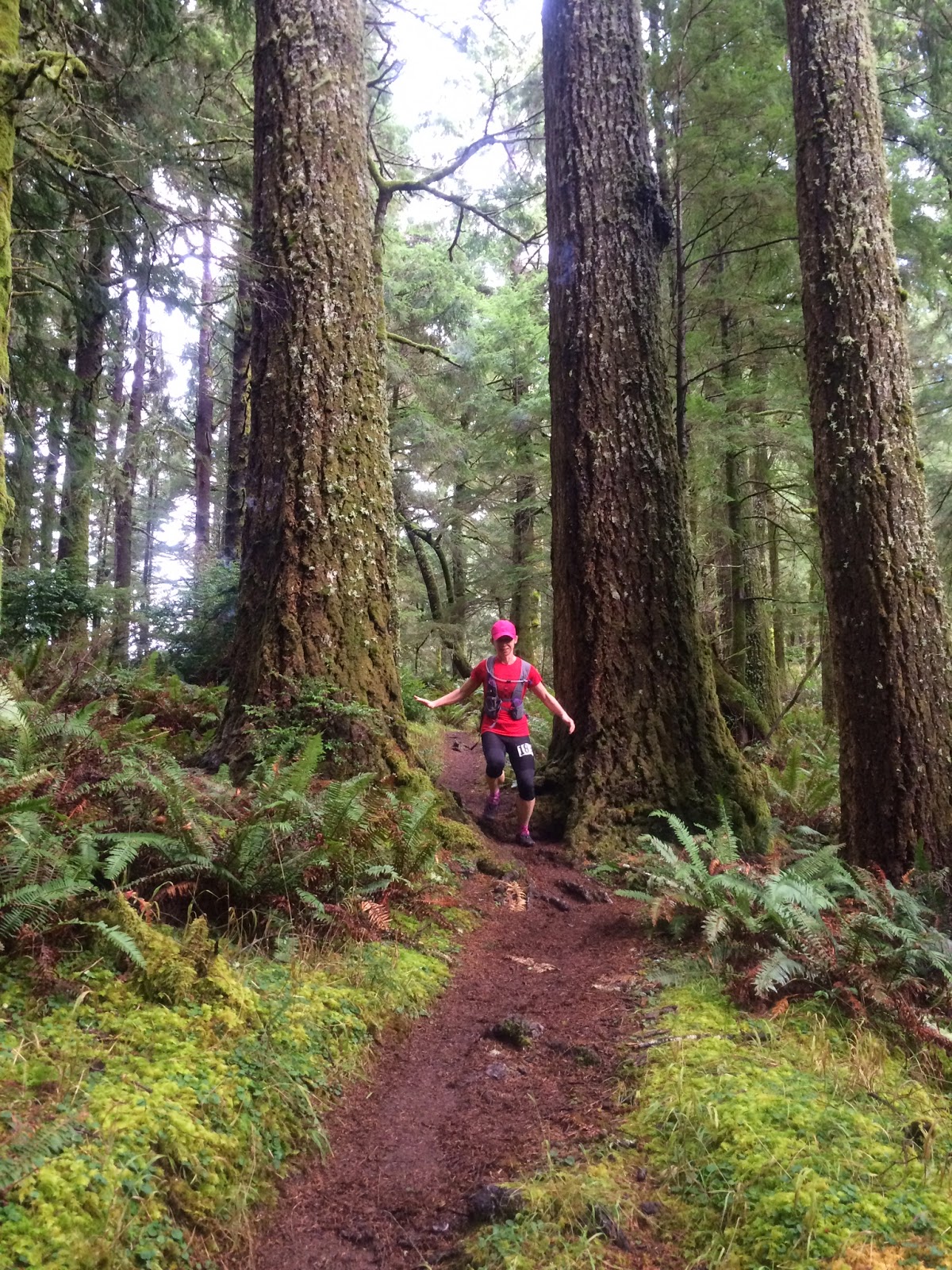 We finally headed off again into the forest and the muddy section of the trail. We stopped to try and take a selfie of us in our matching shirts at a view point when a woman asked if we would like her to take our picture, and we said sure. She then asked if we were the ones with the blog. We said yes we have a blog, but which blog are you talking about? She said the Wildwood one. We smiled and said yes, she told us how much she liked our blog. I think her name was Emily. It made our day. I really had no idea that anyone but our friends and family read our blog. After chatting about how cool it was that we were recognized, Susan took off again. She waited for me where the trail ended and road started.

Susan asked if I thought I could push it on the road so we could PR, I said I didn't think so. The road felt so awful to run on. I take back the part earlier in the post about James/Rainshadow Running not throwing in any mean parts in the race, running the last 2+ miles on the road sucked ass! The nice part was it was nice and sunny and we could see the beach and ocean, which we weren't able to see in the morning. As we approached what I thought was the Adobe Resort, Susan told me it wasn't, that there was another resort before it. As we got closer I saw a sign that said Adobe Resort property, I was so happy she was wrong.

We saw my sister and her dog waiting for us at the finish line. We didn't PR but we were only 2 minutes slower than our PR.

We met up with Kat again, had beer and pizza and hung out watching the ocean in near perfect weather.

Susan and I also won $50 gift certificates to Seven Hill Running Shop in a raffle.