When I started planning our adventure runs in May, I wanted to do all new routes, at least ones we had not ran before. I have been wanting to take Susan to Badger Creek Wilderness for several years but for some reason or another we never made it. I was excited to to run it for our first adventure run of the season but the snow line was too low in May and June, so we weren't able to tackle it until mid-July and that was after I hiked to the top of Lookout Mountain the weekend before to check out the snow level. I told Susan that we were only going to run the route if we had clear skies, because the view from the top of Lookout Mountain was not to be missed.


I feel like Badger Creek Wilderness is the unknown gem of the Gorge / Mt. Hood area. I am not sure if is because it is a 30-60 minutes further from Portland than most of the hikes in the Gorge and Mt. Hood or that it isn't highlighted as much in most of the hiking books, but most people I tell about Badger Creek Wilderness have no idea it exists. 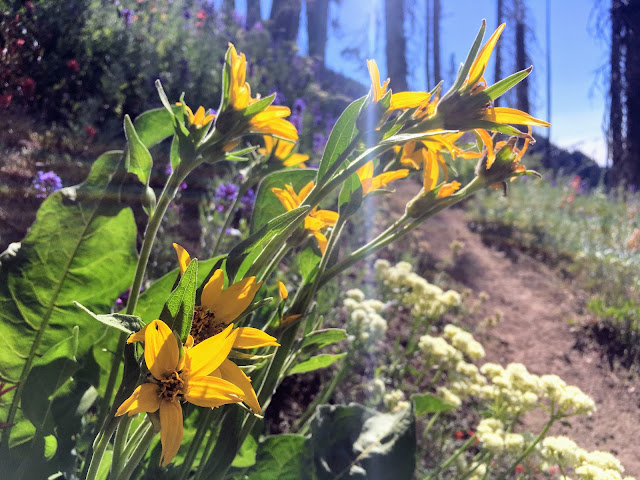 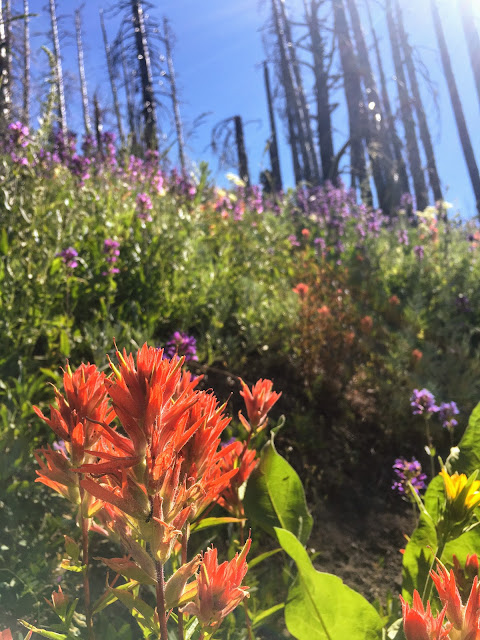 From Portland one of the easiest ways to access Badger Creek Wilderness is the Gumjuwac trail, but it's not an easy hike, it is ~2000 feet of gain over 2.6 miles. The Gumjuwac trailhead, is between mile post 68 & 69 on Highway 35, which is where we started our run. Despite gaining 2000 feet over 2.6 miles, Gumjuwac is quite gradual and runnable.


The Gumjuwac trail ends at the Gumjuwac saddle which a junction for several trails and a sign that explains where the name Gumjuwac comes from and distances to different places. From the Gumjuwac saddle we took the Divide trail to the top of Lookout Mountain which climbs 1300 feet in 2.4 miles. The whole climb up the Divide trail you get amazing views of Mt. Hood, Mt. Jefferson, Mt. Washington, the Three Sisters, Mt. St. Helens, Mt. Adams and Mt. Rainier and once you reach the top of Lookout Mountain at ~6500 feet you get a 360 view of all the Cascade peaks. You also get to see the contrast in landscapes from the desert looking Dalles side of the Gorge to the lush green forested side of the Gorge and Mt. Hood wilderness.


From Lookout Mountain we continued on the Divide Trail to the Flag Point Lookout, which is manned in the summer, so you can't visit the top of it, but it is impressive nonetheless. Originally, I was going to have us do an out and back on Little Badger Trail 469 from the fire lookout to add on miles, but we decided to do it on the Badger Creek Trail, since there was less elevation gain and loss. We took a quick snack break at bottom of the Flag Point Lookout and then continued down the Badger Creek Cutoff Trail.

The Badger Creek Cutoff Trail is the only unmaintained trail of the whole route. It's not hard to follow, but it is over grown and feels like a stream in parts, but it's only a few miles. Once we made it to the bottom of the cutoff trail, we turned left on the Badger Creek Trail for a quick out and back. It was a little after noon at this point and starting to get pretty warm and running along side the river made it really tempting to jump in. As we headed towards Badger Lake on the Badger Creek Trail we were greeted by tons of huckleberry bushes, most of them weren't ripe, but we were able to pick enough for a quick trail treat.


I really love the variety of this route, every few miles you get something different: stellar views of the Cascades, a fire lookout, to run along a creek, a lake, and huckleberries! 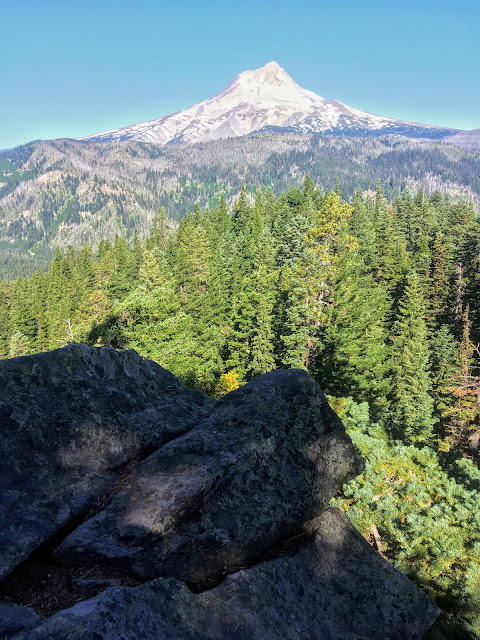 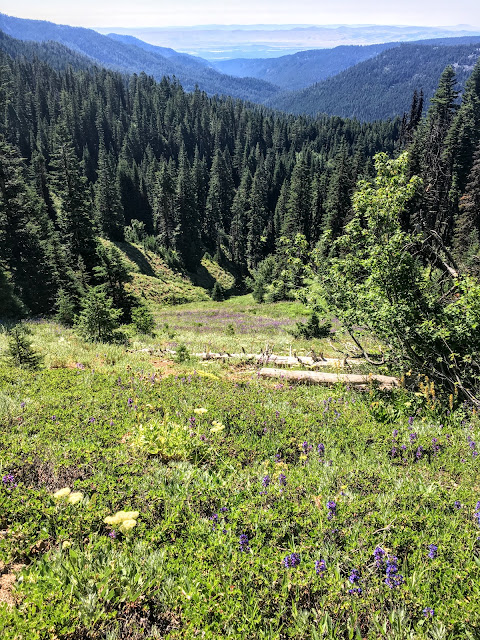 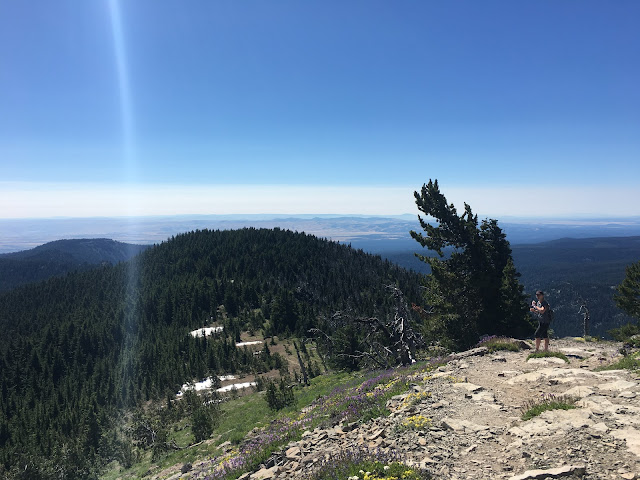 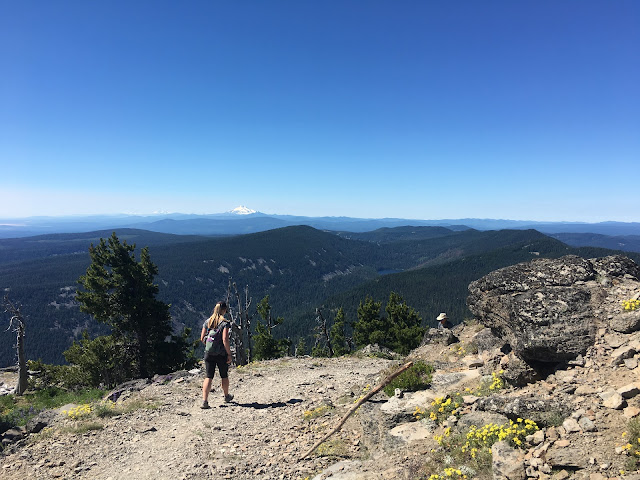 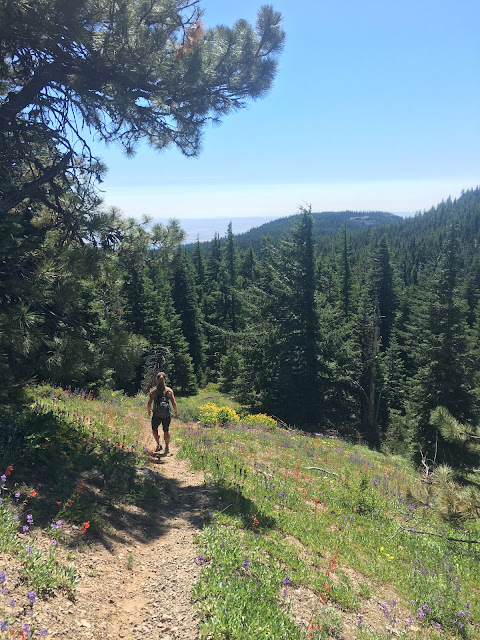 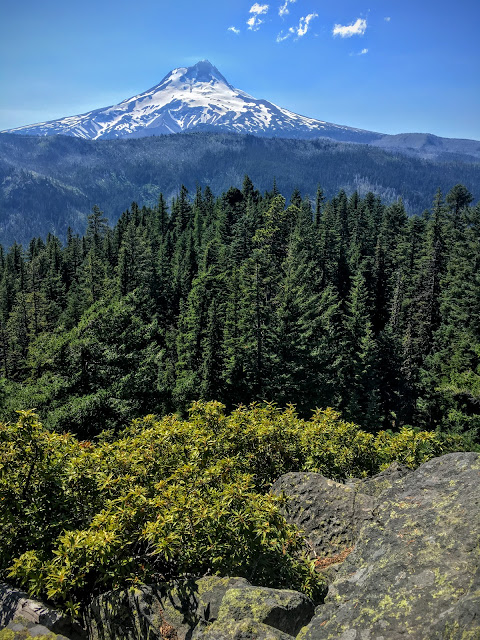