In keeping with doing all new routes for our adventure runs, for August we decided we would head out to the Willamette National Forest area. My first thought was to run the loop around Broken Top, but the Ranger Station said that the snow was still pretty deep. My next thought was to do the loop around Three Fingered Jack, but the temperatures were predicted to be in the high 90s the week we were planning on running and most of the route around Three Fingered Jack was burned during the B&B Complex fires in 2003. Wanting more tree coverage I decided on Pamelia Lake to Jefferson Park and the Hunts Cove Loop.

Pamelia Lake is a limited entry area and you must obtain a permit from recreation.gov beforehand. Normally you need to get a permit months in advance, but by some stroke of luck we were able to obtain one only a week in advance, it probably helped we were running on a Monday, not a weekend. I have been wanting to show Susan Jefferson Park for awhile, we tried in 2015 but we didn't make it all the way to Jefferson Park. I also tried in 2014 to run to Jefferson Park with Karrla from Pamelia Lake, but we didn't make it due to weather. Third time is a charm, right?

A week before we planned to run our adventure run the Whitewater Fire started in the Mt. Jefferson Wilderness area north of where we were going to be running, but none of the trails were planning on running were impacted. The night before our run, I was watching Game of Thrones and skimming Facebook when I saw a notice from the Willamette National Forest that ~12 miles of the PCT were closed, which included the part we were going to run to Jefferson Park. Luckily the Pamelia Lake trailhead was still open. I sent Susan a text with the news and I pulled out the maps and started coming up with alternative routes.

I planned a few routes which included adding on some out and backs on the PCT south of Hunts Cove and one route which started at Marion Lake trailhead instead of Pamelia Lake. Susan and I were planning on leaving at 6am and had a 2 hour drive, so we had plenty of time to discuss which route we were going to do. I was beginning to wonder if I was being stupid by running so close to a forest fire, but my husband told me that if they thought there was danger they would have closed the area where we were going.

Susan and I left Portland a little after 6am on Monday morning, when we were within 1/2 an hour of the Pamelia Lake trailhead the smoke started to get pretty bad. We kept hoping that smoke was going the opposite direction than we were going. We decided that when we got to the Pamelia Lake turn off we would get out of the car and see how bad the smoke really was and make a decision. Well the smoke was really bad, there was no way we could run 25+ miles in it, so we decided to go to Marion Lake instead. The air quality at Marion Lake wasn't any better, luckily it was only 9am and I had packed several maps and hiking books.

After flipping through the various books, we decided on circumnavigating Three Fingered Jack, it was only 30 minutes from where were and was a ~20 mile loop. It was a little less mileage than we wanted, but given the extra driving time it was perfect. Luckily the extra 30 minutes of driving was enough to get us away from the overly smoky air, there was still a haze on the horizon, but it didn't feel like we were breathing in camp fire.

We decided to run the loop counter clockwise, because the route we were using was from Douglas Lorain's One Night Wilderness: Portland, which has you go off trail for 2.1 miles, which is ~5 miles from the trailhead going counter clockwise. We wanted to tackle the off trail portion first just in case it was sketch or we couldn't find it. As luck has it, we never did see where we were supposed to turn off and we just continued on the Old Summit Trail 4014 towards Jack Lake. About the same time we decided to give up in the cutoff trail we ran into 2 guys coming the opposite direction who asked us if we knew where the cutoff trail was. We told them we had been looking for it and only saw a faint trail but were going to continue the loop via Jack Lake. They weren't even aware there was a loop and they decided they would do it too. After they took off Susan and I laughed a little about it, but hoped they would be ok, they didn't have much gear or a map.

The whole time we were on the Old Summit Trail we got amazing views of Mt. Washington and the Three Sisters, it was hard not to stop every few feet to stop an take pictures. Due to most of the area being burned in the B&B Complex fires there isn't a lot to obscure your views.

Once we reached Jack Lake we stopped for a break and to consult the map. The map I had had a Three Fingered Jack insert, but the trail from Jack Lake went off the map so we weren't quite sure where to go. Luckily, we had cell phone coverage and were able to pull up a route from Jack Lake on NW Hiker. A little after leaving Jack Lake we got to a trail junction with a sign that had trail names, but the NW Hiker map only had trail numbers on it and the insert in my map was useless. As we were debating which trail to take a trail ranger came down the trail and asked us if we needed help. We showed Ranger Chris our map insert and said we weren't sure where to go. He said, "Oh you have a really old map." Then he turned it over and showed us that in fact the whole loop around Three Fingered Jack was on the map, just not the stupid insert. Doh!

From Jack Lake we went towards Wasco Lake, about this time the sun was starting to beat down on us, we were really wishing for a little tree coverage. We also started getting some really good views of Mt. Jefferson. Around Wasco Lake we crossed over a stream and Susan said she was going to fill up her bladder, I hesitated because I didn't have my filter but the thought of having ice cold water was greater than my giardia concerns. Filling up our water bladders at this location was probably the best decision we made the whole day.


We eventually made our way to the PCT and were rewarded with spectacular views of Three Fingered Jack. It is a 9 mile stretch on the PCT to the car without anywhere to stop for water and it must of been in the mid-90s. With the lack of tree coverage the heat was really starting to get to us, luckily there were quite a few patches of snow, where we were able to stop and fill up our bandanas and bras with snow to cool down.

5 miles into the 9 mile PCT stretch we both commented that we were starting to get low on water, good thing we filled up at the creek. About the same time we ran into the 2 guys we saw earlier in the day, they were in fact hiking the whole loop. They said they ran out of water a while ago, but they were going to be ok. They probably had 10 more miles to go. Fortunately for us we were running the downhill portion of the route and were hopefully we would make it to the car before we ran out of water. Did I mention it was hot AF? About 2-3 miles from the car we both ran out of water, it was a quiet slog back to the car. We drank so much water when we got to the car that we had to stop in Detroit to get more.


We had completed another successful and beautiful circumnavigation, I would just suggest doing this on a cooler day. 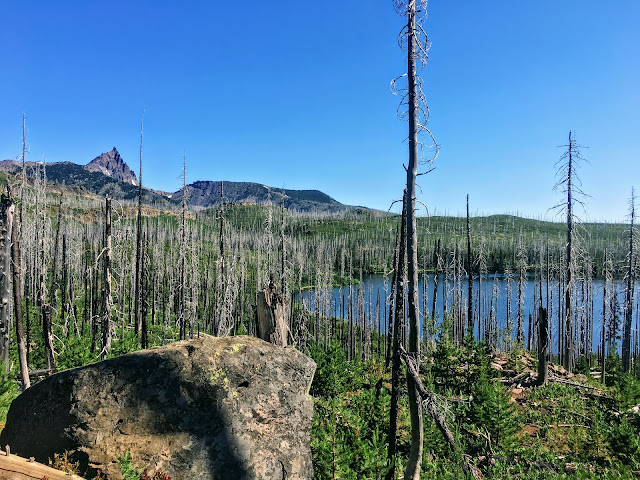 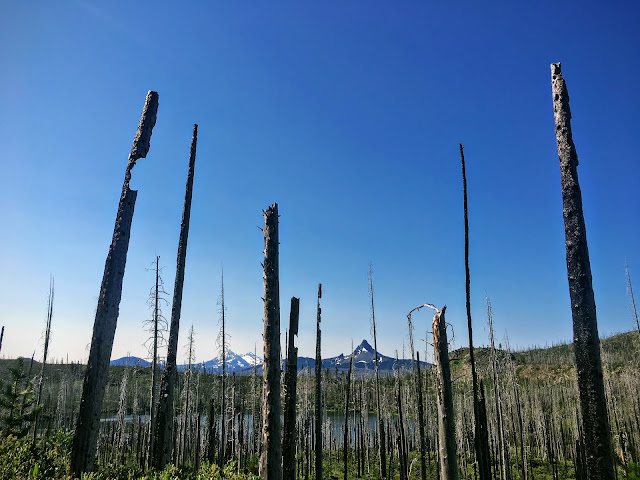 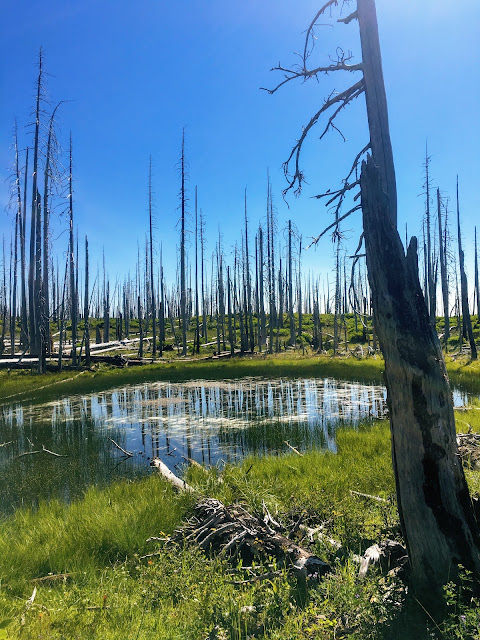 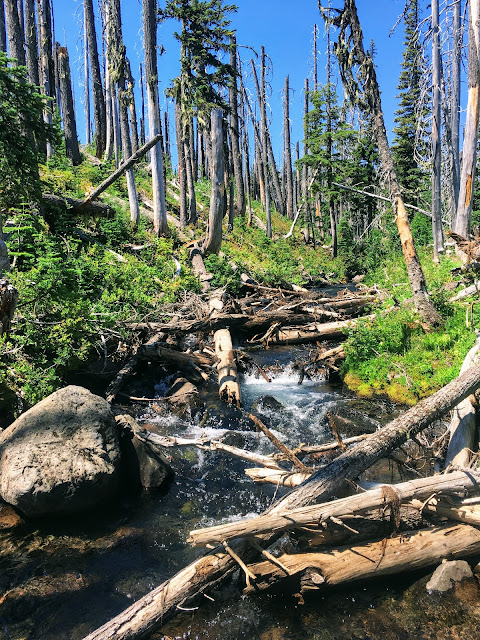 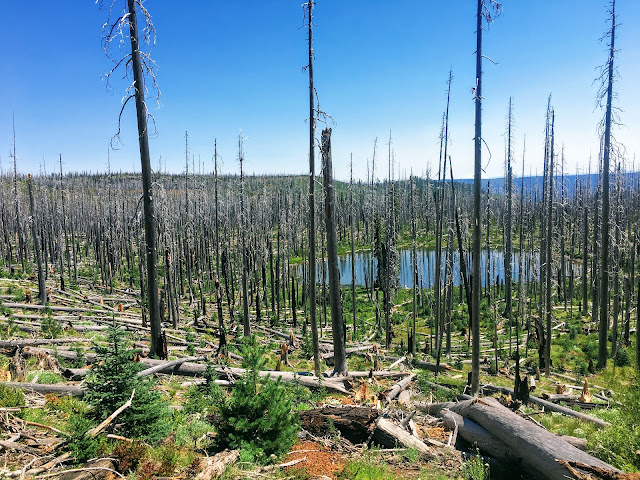 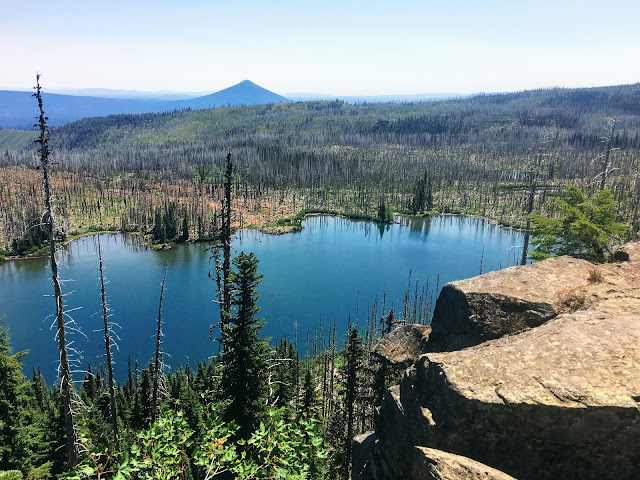 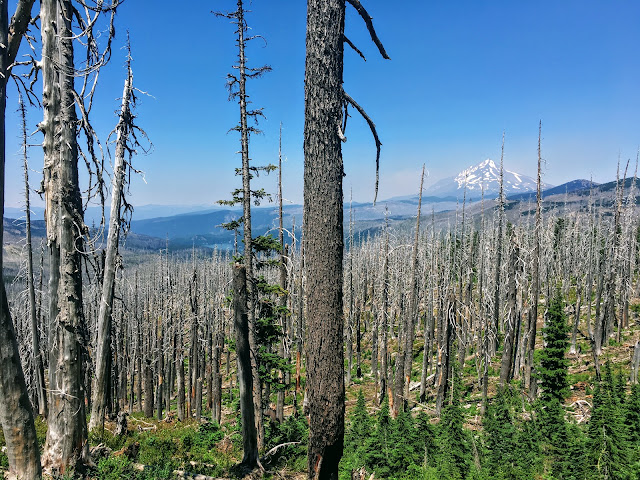 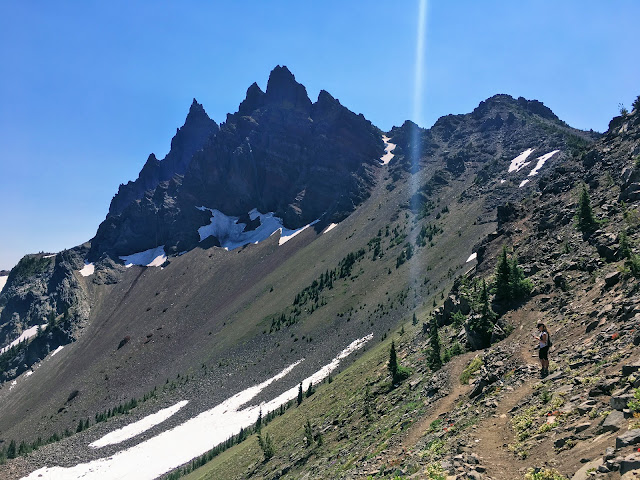 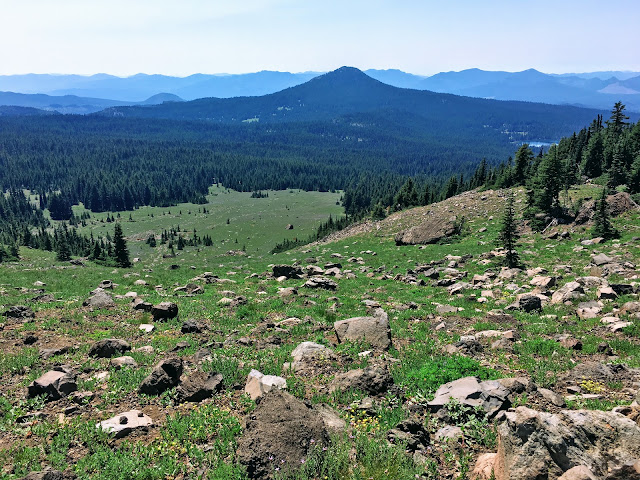 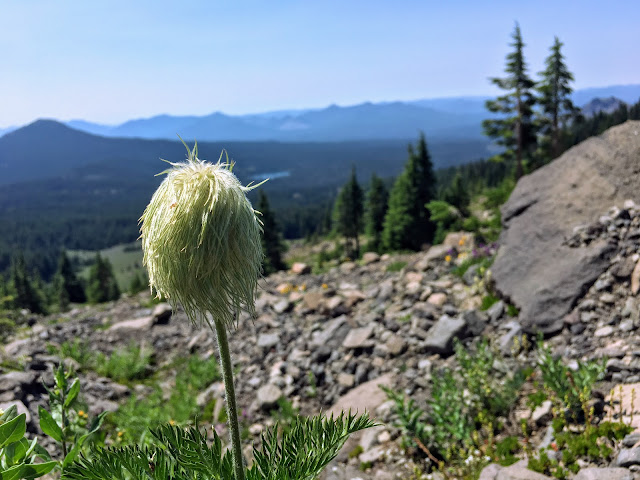 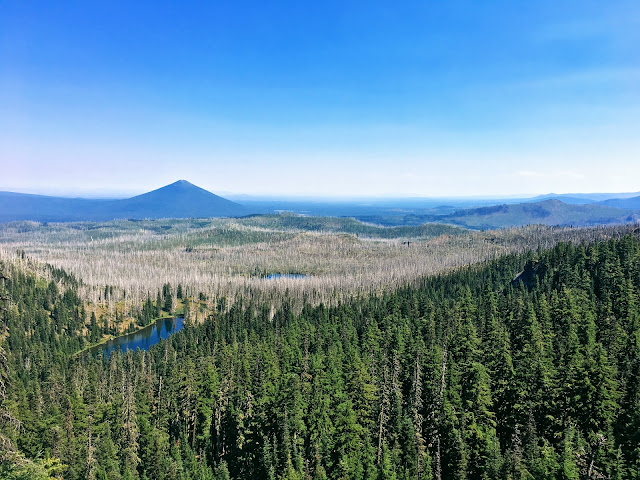