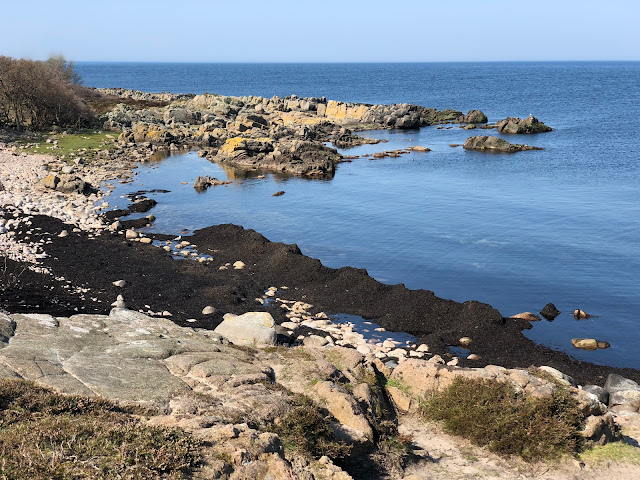 I was in London and Copenhagen for work with a weekend in between each city, I had planned on spending it exploring Copenhagen, well that was the plan before I googled "Trail running Denmark". Hammer Trail, the most famous trail race in Denmark takes place on an island called Bornholm and the more I researched the island the more I wanted to go.  Bornholm is actually closer to Sweden than it is to Denmark. You can fly from Copenhagen to Bornholm or you can drive and take a ferry from Ystad, Sweden. Since I was planning this a week out, plane tickets were ridiculous, so we rented a car and got ferry tickets.

I booked us a last minute room with an amazing view at Nordlandet, a small hotel boutique hotel on Northwest side of the island.

The ferry arrived into Bornholm around 6 pm. By the time we checked in and settled into our room it was around 7pm. Instead of venturing out we decided to checkout the Underbar which is in the cellar of Nordlandet. It is an intimate with quite a few local beers on tap and a small menu, like most of the hotel it has amazing view of the Baltic Sea.


We settled in at a table by a window and enjoyed some snacks and drinks. Still a little jet lagged we went to bed early to hopefully get a good nights sleep.

We started off the day with a European breakfast at the hotel, which is included with the room and once again we had a table over looking the sea.


Since I had not had a chance to run since we had been in Europe and I wanted to come to Bornholm specifically for some trail running, we decided I would run for a few hours while John hiked. We decided to go to Hammerknuden a protected nature on the northernmost point of the island and only 2 km from the hotel. During my 2 hour run, I encountered very friendly cows, sheep and their babies, 2 light houses, a 13th century chapel and beautiful rugged coast lines. It felt so good just to run. 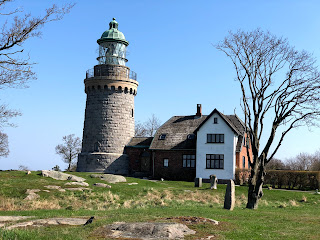 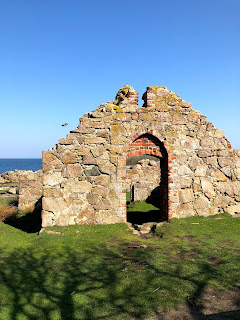 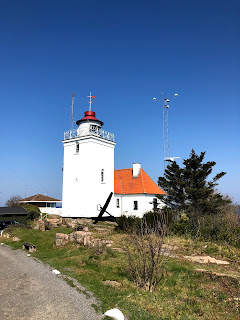 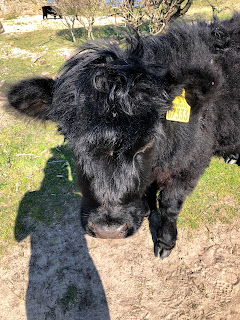 After our hike and run we cleaned up and headed out to check out the 2 breweries on the island.

Beer Here was the first brewery we visited. They have a small tap room in the brewery with  2 beers on tap and everything else available in bottles. We had a glass of each of the beers they had on tap and both really liked their IPA named Hippy Juice. The owners were extremely friendly and John being a brewer had to geek out about beer and brewing for a bit with them. They said they were planning a trip to Portland to check out our breweries, we gave them a list of our favorite places and they gave us a few recommendations for places to go when we got to Copenhagen. 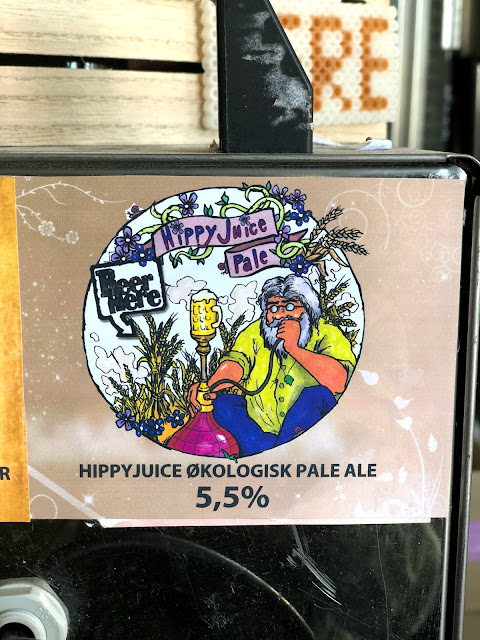 After Beer Here we headed south to Svaneke Brewery, which luckily had a restaurant. I can't say I was overly impressed by their beer but my soup and salad were pretty good. John liked his beer more than I did, but we both agreed that we preferred Beer Here. 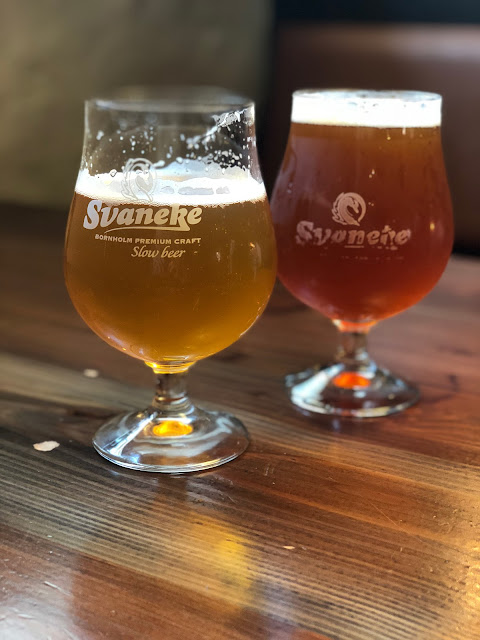 Since we had lunch after 2pm, we decided that we would just pickup some snacks for dinner and have them with the bottles of beer we purchased at Beer Here. Bornholm is famous for their smoked fish, which is one of John's absolute favorite things. One of the more famous smokehouses is Roegeriet i Svaneke, which was not very far from the brewery. John picked up some smoked salmon and trout and was convinced I was going to try it with him. We also wanted to pick up some bread and cheese for dinner, which I was sure we could get at a farmer's market in Ronne.

Before driving 40 minutes to Ronne we had a cup of coffee at a cafe across the street from the smokehouse, jetlag was starting to hit me again.

When we arrived in Ronne it was close to 5pm and all the bakeries were closed and there was no farmers market. I was pretty disappointed and not excited by the selection of items at the grocery store, but we did with what they had. If I had done a little more research I would have discovered Torvehal Bornholm a market hall in Ronne where you can local food. 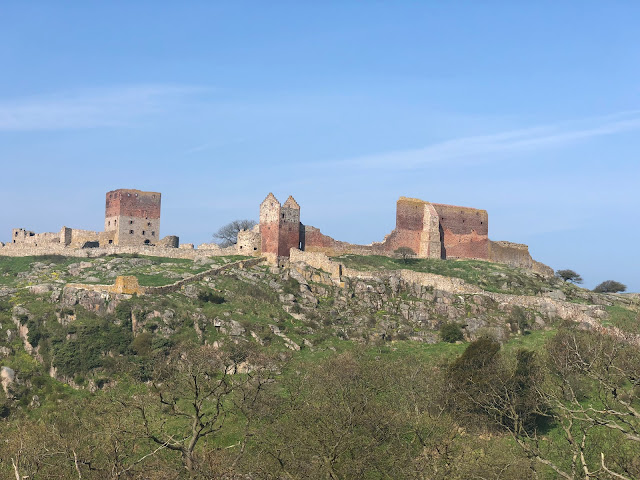 After breakfast at the hotel we headed over to the Hammerhus Castle, which touts itself as largest castle ruins in Northern Europe. According to Wikipedia it is still under debate who actually had the castle built some sources say it was built in the 13th century for the archbishop of Lund, but some new evidence suggest it might have been built for Valdemar II of Denmark. Getting there early (10 am) on Sunday morning we practically had the place to ourselves. Entry is free and and you are able roam around the whole castle and grounds.

I was still determined to find a bakery since we didn't make it to one on Saturday, though a lot of the bakeries are closed on Sundays. We did find one on Svaneke that appeared to be open on Sundays, we were kind of heading that way anyway on our way to hike in Ekkodalen. After 40 minutes of driving and trying to find the bakery we discover it was closed. DAMN IT. Oh well the bakery would have to wait until Copenhagen.


Since most things are closed on Sundays and the weather was fantastic we decided to spend Sunday afternoon hiking. We decided on checking out Ekkodalen on the recommendation of our favorite bartender. Ekkodalen, which means Echo Valley is Denmark's largest rift, it is 12 km long. There is supposedly a very specific spot where you can hear yourself echo. We didn't have a map of the area or a specific trailhead, I simply entered Ekkodalen in Google Maps and hoped for the best.


We parked on a dirt road when Google Maps said "you have arrived" and started hiking down a forest road which eventually met up with some trails. Since we didn't have a map I was relying on Strava to get us back to the car as we wandered around. We eventually came to a cliff and saw people hiking on a trail below it and figured we made it to Ekkodalen. We made our way down to the valley floor and saw people at what looked like some sort of landmark randomly shouting in Danish, I assume it was the echo location.

We stopped for a snack at the Ekkodalen cafe and hiked for a few more hours. This is where we should have headed back to catch the ferry but we were enjoying ourselves so much we stayed one more night and enjoyed one more evening at the Underbar.