By Ann Wallace - August 19, 2012
Susan and I took off another day from work to run 26 miles in the Gorge. We had decided to run 26 miles of the Gorge Trail 400, leaving one car at Angel's Rest and having John drop us off 26 miles down the trail. As I started to seriously look at my map, I noticed that trail 400 isn't a continuous trail. Parts of the trail piggyback on other trails, and between Ainsworth and John Yeon State Park it didn't look like the trail existed. Once I realized this wasn't going to be as straight forward as I thought, I called the Ranger Station. It was 6pm on Friday night, they were closed and not open again until Monday morning, which is when we were running. From all the backpacking trip planning I have done, I know to call the Ranger Station early in route planning, this was big miss on my part. Luckily, John and I were going hiking in the Gorge on Saturday and could stop by the Hood River Ranger Station, which is open on Saturday, and check out the "missing" section of the trail.

The Hood River Rangers hadn't heard of the the Gorge Trail 400, but we were able to pick a few nice maps (I love hiking maps). After our hike we decided we would stop by Ainsworth and John Yeon to figure out if there was actually a trail or if we had to run on the road. As soon as we arrived at the trail head at John Yeon, I noticed a sign saying a section of the trail was closed due to highway construction. John suggested I run it anyways and ignore the sign, I was debating it. Just as I had suspected the section between John Yeon and Ainsworth is indeed a road, but it is less that 2 miles so we could deal with it. I was still a little uncertain about the trail and really wanted to talk to someone about it, so we drove over to Multnomah Falls to talk to their Rangers. The only reason I didn't do this to begin with is Multnomah Falls gets crazy busy with tourist on the weekends.
The Rangers at Multnomah Falls were extremely helpful and did confirm that the section of trail between Elowah Falls and Tanner Creek is closed and being worked on. They also gave me a map of the trails around Multnomah Falls and it showed how Trail 400 connected with the other trails! After studying the map for a little bit and doing a little math, I figured out that from Angel's Rest to Ainsworth State Park it is 13 miles, so we could do an out and back. We could even take the Larch Mountain trail back to Angel's Rest to mix it up a little on the way back. Doing an out and back also meant that we would pass the Multnomah Falls Lodge, so we could get more water if we needed it.  We would have to run back up hill around mile 21, but the high point is only 1800 feet, so nothing we hadn't done before.


Monday morning when we got to the Angel's Rest trail head we were the only people there besides a couple and their goat. Yes, I said goat. They put their goat on a leash to hike with it. I tried to get a picture without them noticing me.

We had a nice and steady 2.4 mile climb up to Angel's Rest, with some fantastic views of the Gorge. We passed several waterfalls running down to Multnomah Falls. Once we got to Multnomah Falls, we had gone a little over 8 miles, and hadn't drank that much water, but Susan suggested we fill our water bladders. She was somehow able to successfully fill her bag from the water fountain, me on the other hand lost more water than I put in the bladder. I decided to buy a (16 oz) bottle of water, just in case I needed it later.

We continued on our way to Ainsworth State park, passing a few more waterfalls. There were no major climbs but enough rolling hills that we knew the run back was going to be as difficult as the first 13 miles. The last 2 miles of the trail to Ainsworth were pretty over grown and rocky, a bit more difficult to run on than the rest of the trail. Normally we would stop at the half way point to have "lunch", but we decided to run back a bit on the trail and find a less over grown area to eat.

Once we finally stopped around mile 14.5, we looked at our water levels, and we both had less than half of our water left. We split the water I bought at Multnomah Falls, but we knew we were going to have to try and conserve water, since we always drink more water the second half of the run. We also decided to take the Larch Mountain trail back, which meant we were not going to run by the lodge again.

The Larch Mountain trail is a pretty unforgiving trail, it is rocky and an unrelenting climb. Susan "bonked" (as she put it), so we walked a lot of the hill. I figured since we weren't running I didn't need to drink any water. Once we reached trail 420, I thought the climb was over and started drinking more water than I realized. Well the climb wasn't over and we still had 5+ miles to go. Around mile 22, I ran out of water and Susan only had a little left. She was nice enough to share it with me, but it was pretty sweet from her electrolyte mixture. We stopped at every stream and splashed our faces with water and put our hats in the water to cool off. It was a long, long 4 miles back to the car. The last 4 miles were also the most exposed, it was 90+ degrees that day. We finally reached the car, which had been sitting in the sun, we both grabbed our water bottles and quickly drank all of the very hot water.

The run was nothing but epic. We under estimated the heat. If we wouldn't have taken the Larch Mountain trail we would of passed the Multnomah Falls Lodge and would of been able to fill our packs with water. Since this run we have gotten iodine tablets, and I own small water filter for backpacking, which would also work. 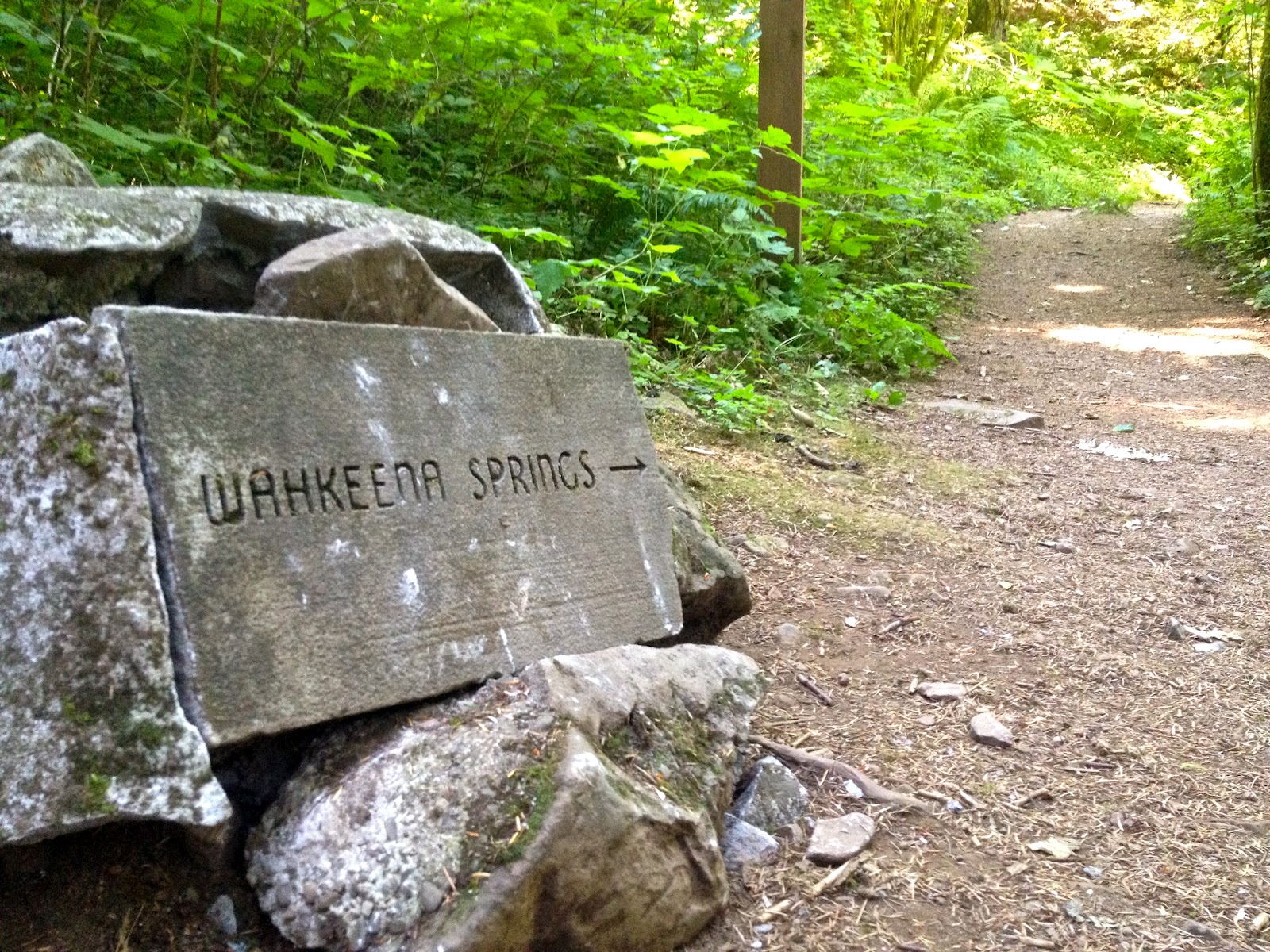 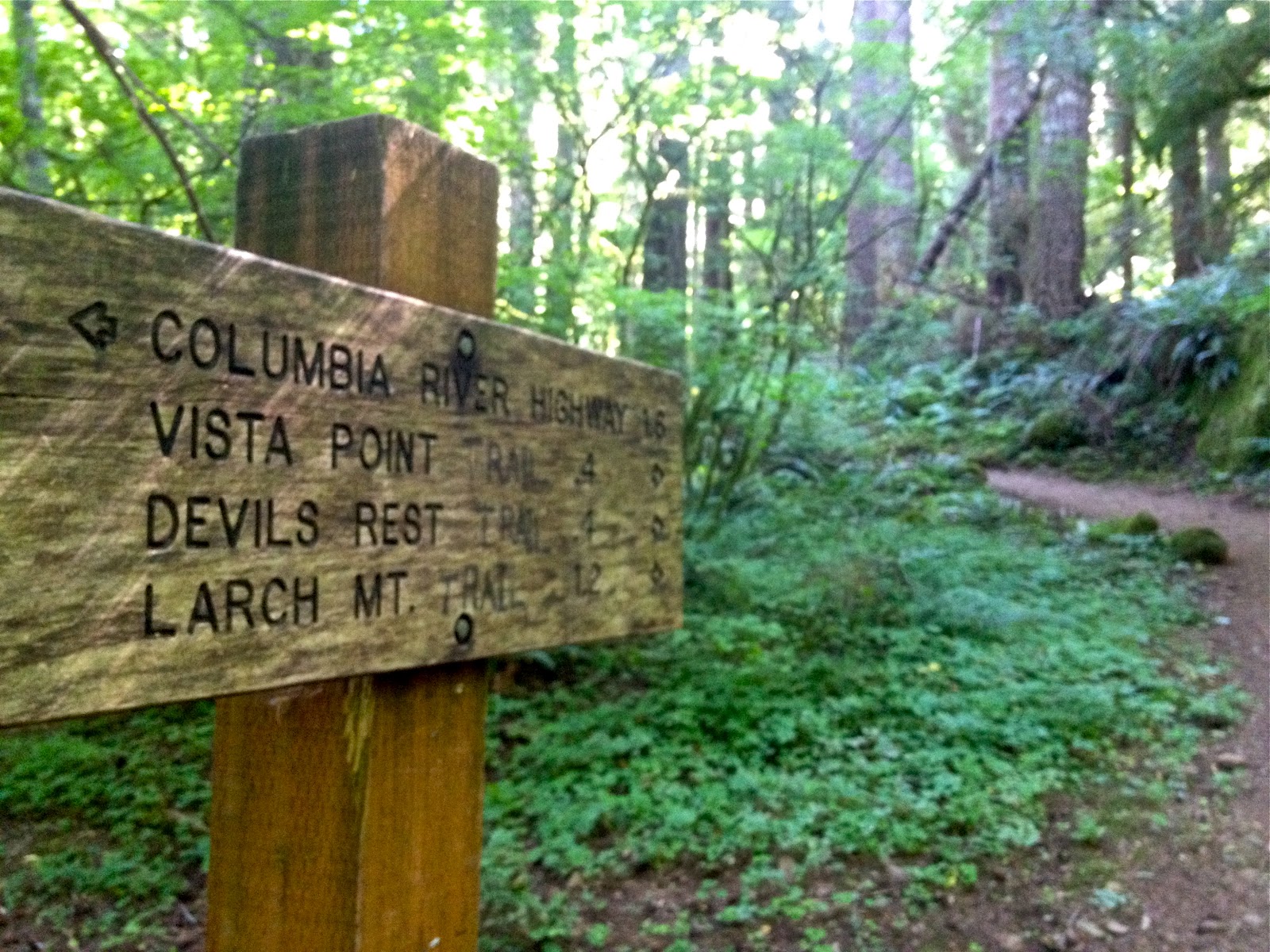 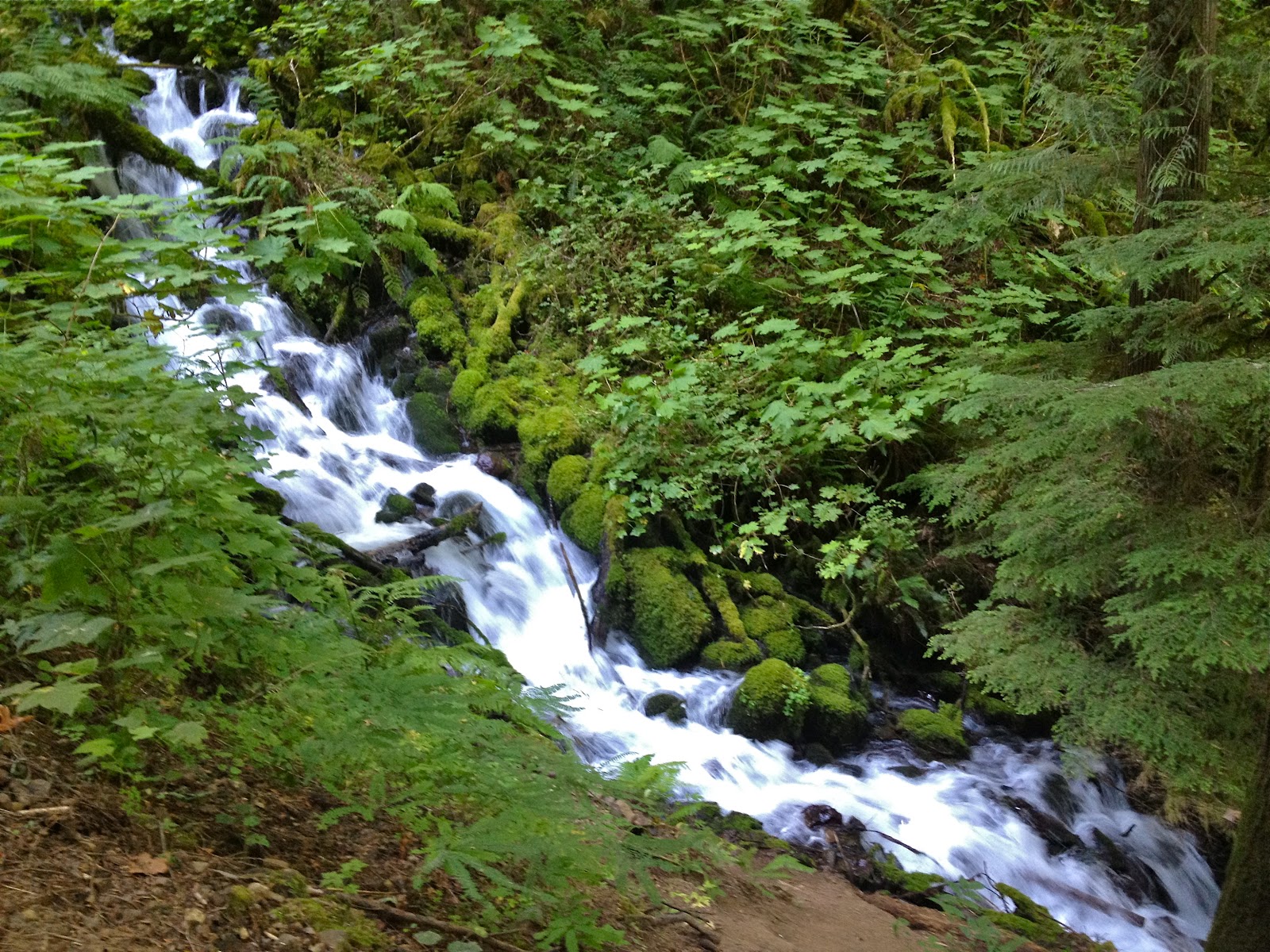 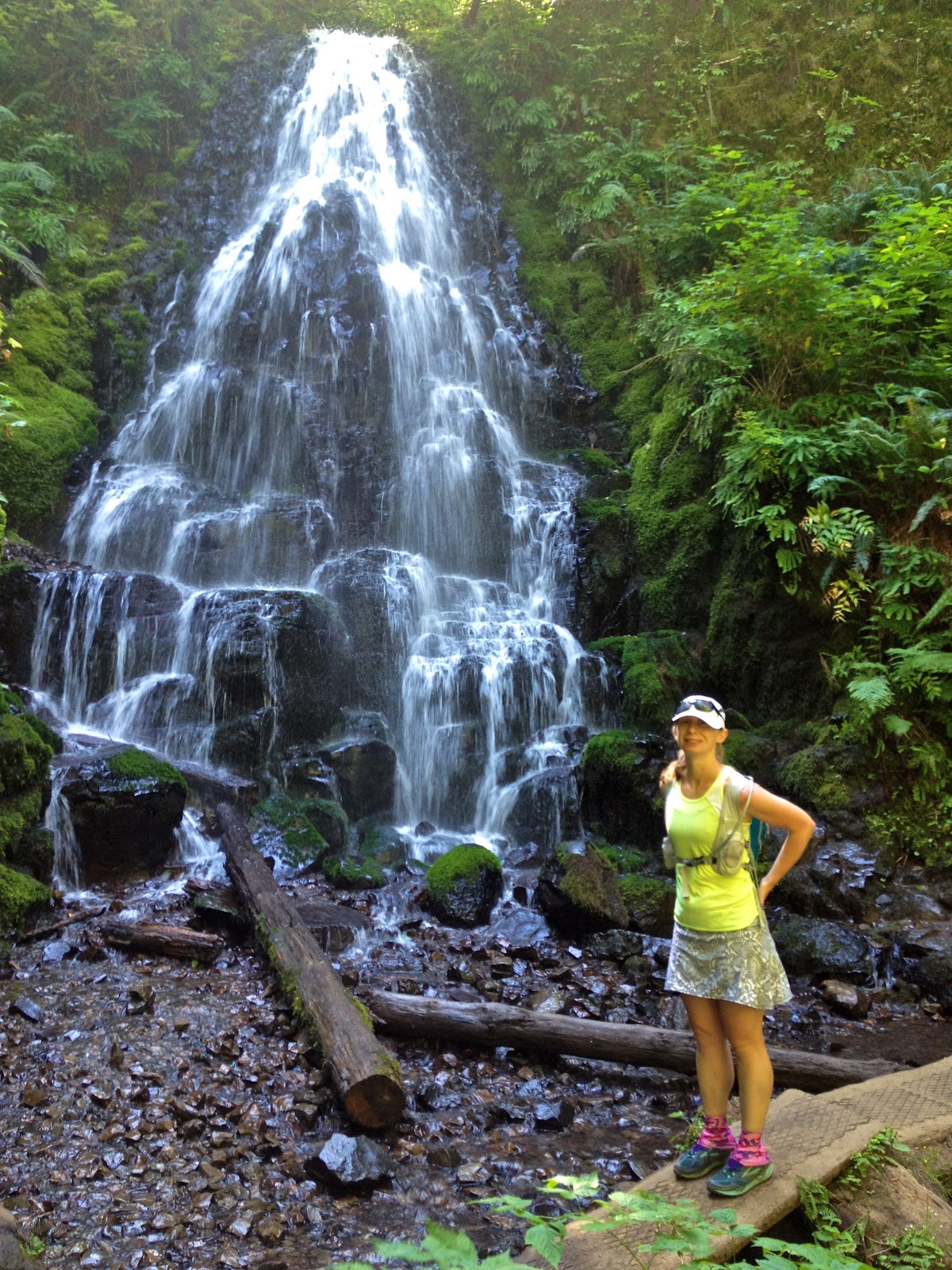 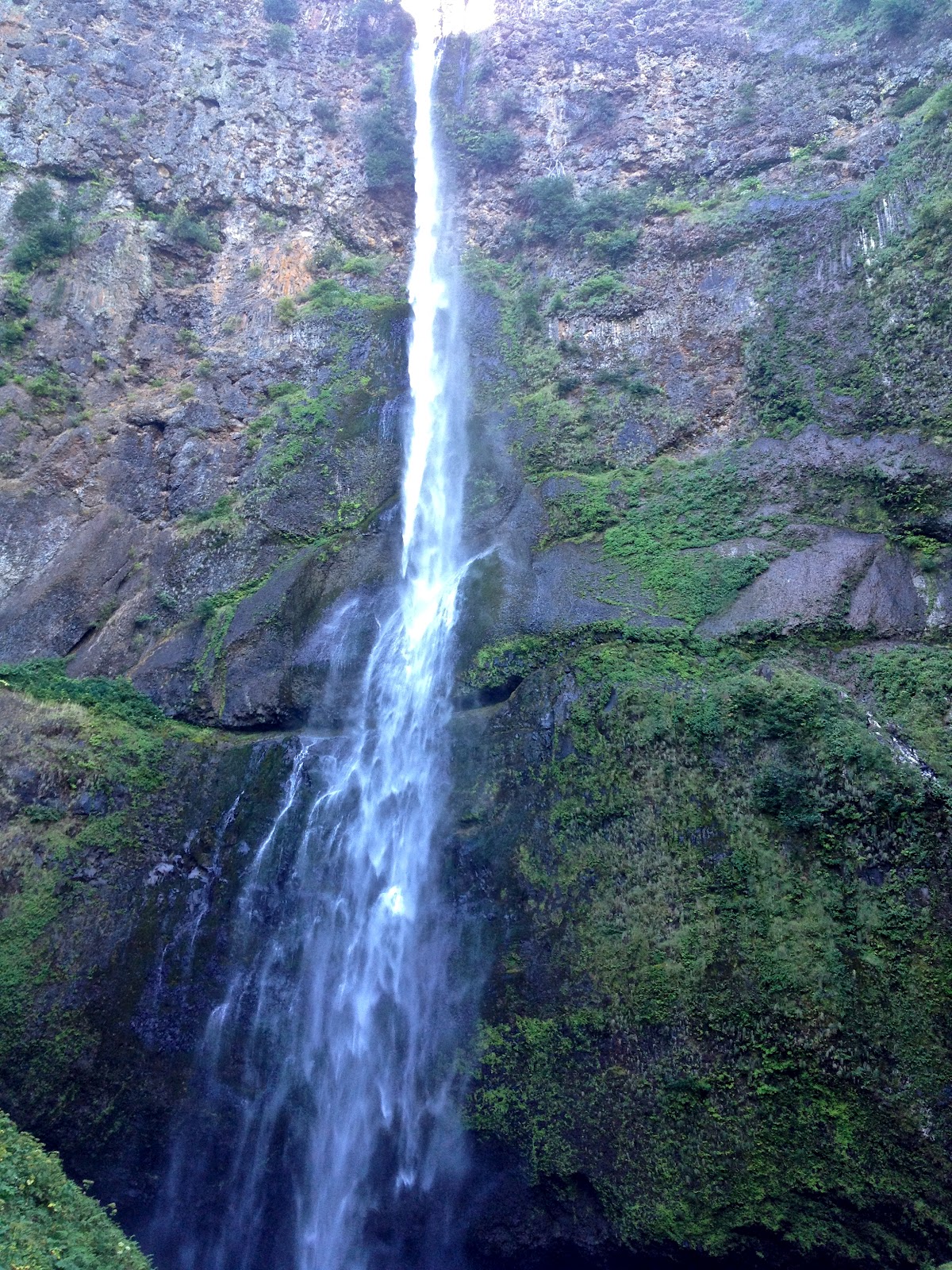 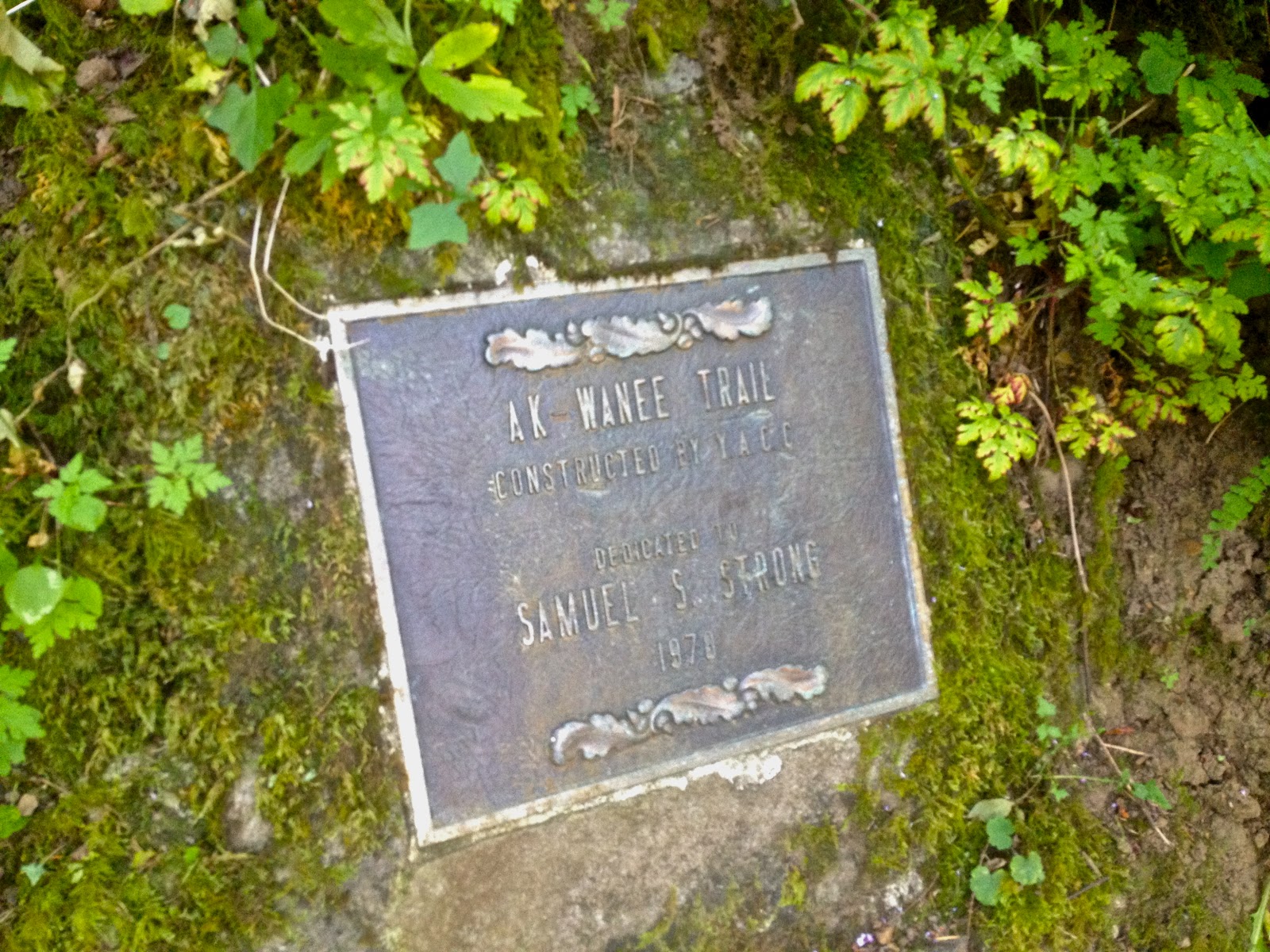