Showing posts from January, 2012
Show all

Recently Susan and I watched, "Unbreakable: The Western States 100", which follows 4 top ultra runners and their journey to win the The Western States 100 mile race. It was an interesting film to watch, especially since it features Hal Koerner . Hal is the owner of Rogue Valley Runners and race director of the Lithia Loop trail marathon. I don't personally know Hal, I only met him briefly after the Lithia Loop marathon, he put on an amazing race and was extremely nice. It just made the movie a little more interesting to have crossed paths with one of the runners. It was nice to see even the elite ultra runners sometimes have to walk up hills. I always feel a bit like a wimp when I have to walk, it is nice to know everyone does it at some point. Without giving the end of the movie away, I will just say that Susan and I said, "wow" more than once. I thought running 30+ miles was quite a feat, but after seeing all these people run 100.2 miles, I am just i
Post a Comment
Read more 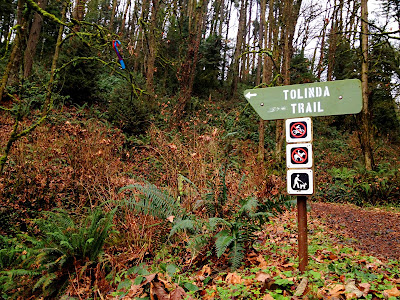 After the previous week, bailing on two additional vertical trails, we were a but nervous to start on Tolinda-- and we had to find the trailhead first. In eight years of running in Forest Park, I had never heard of the trail nor noticed its start. Turns out I've been driving right past it for Leif and Wildwood trailheads along Germantown Road, all these years. Such is the beauty of the All Trails Challenge. The trail is fairly wide and well-graded, but there's no getting around that it goes up. Up to Leif, where it jags to the south and continues up to Wildwood and then Skyline as the Oil Line Trail. It was challenging, we had to walk a couple of times, and it felt more secluded than some of the other connectors. Once we got to Skyline, Bob suggested we run down the road to the Springville trailhead and pick up Trillium back to Leif. It sounded a bit more interesting than just heading back down Oil Line, so that's what we did. Original plan: Park Germantown tol
Post a Comment
Read more
More posts