Showing posts from December, 2015
Show all

Doing the (North) Nasty and then some 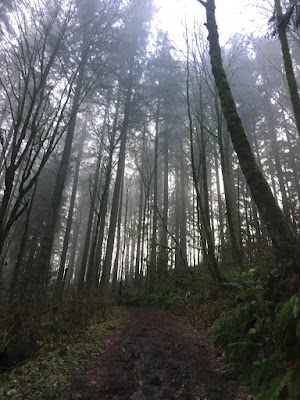 uphill both ways Yassine of Animal Athletics decided to do one last long training run in preparation for his 3rd HURT 100  and invited a lot of the Portland trail running community to join him. His route was 4 loops of the "North Nasty", which is ~11 miles and 3000 feet of elevation gain.  Look Susan does run uphill! Last year Animal Athletics did several group runs they called the " Nasty Series ", for one reason or another Susan and I weren't able to make any of the runs, well technically we tried to make one, but we were late. This time since Yassine was doing loops, we knew we could start any time and he would eventually   catch up to (pass) us .  We decided to do 1 loop of the North Nasty and add on an extra "easier" 9 miles to give us a good 20 miler.  Found when we went down the wrong turn off on Skyline We really enjoyed seeing so many people running the route and chatting with everyone, even if was just passing and sayin
1 comment
Read more 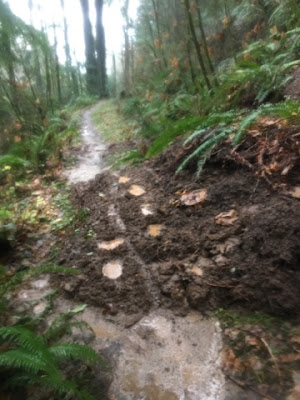 Mud slide It was a dark and stormy morning... day... week... month... This December has turned out to be a really wet month, even by Oregon standards. We have had quite a bit of flooding and road closures this week, so I shouldn't of been surprised to see so many parts of Wildwood flooded and washed out, but I was.  I ran about 18 miles and every 2 miles or so there was either a wash out, mud slide, or over flowing streams. I can't ever remember seeing so much damage on the trail at one time. I had to stop taking pictures because I was so wet and cold, my fingers just wouldn't function. I don't think I have been that wet running since the The North Face 50k in California in 2012, which I am pretty sure was the last time it rained that hard in Northern California. Luckily Wildwood isn't as much of a disaster  as the trails during The North Face 50k, but they are not far off if the rain doesn't let up some.  The pictures below are between Spr
Post a Comment
Read more
More posts