Showing posts from February, 2013
Show all 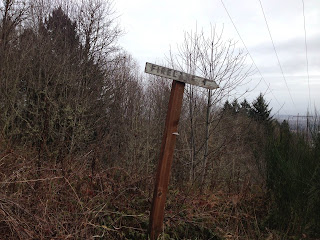 Firelane 4 was not part of the original route  We were suppose to run 18 miles this Saturday, but Susan's son got sick and she couldn't run until Sunday. Since I had already planned on running on Saturday, I decided to do a short run and run 18 with Susan on Sunday. Somehow my 4-5 mile run turned into 8 miles and I legs still felt like they were recovering from the 23 miles the previous Sunday. I knew Sunday was going to suck. Neither of us ended up sleeping well Saturday night and at the very last minute I rerouted the run to cut off 3 miles. Shaving off 3 miles off a loop is harder to do than you would expect, especially when you haven't had a lot of sleep. But as most things do, it worked out just fine and at the end of the run I don't think either of us regretted cutting the run short. Original Route: dogwood - wildwood .66 ww (8.5 - 13.5) maple 5 maple - leif 3.66 leif - saltzman .23 saltzman - ww .5 ww (16 - 7.90) wild cherry 8.1 wild cherr
Post a Comment
Read more 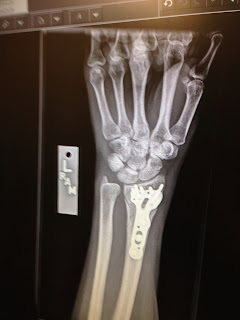 Heavy Metal A quick update on my wrist. It has been 6 weeks since my surgery, which means I had follow-up x-rays to make sure my bone is healing ok, and I got  the green light to ditch my brace. My x-rays came back fine, my bone is 2/3 of the way healed. Still no heavy lifting or snowboarding, my range of motion is still limited, but otherwise I am using my hand normally. I am still experiencing a little pain and swelling, but since I stopped wearing my brace on Thursday I have notice my range of motion improving more than it has in the last 6 weeks. This is really encouraging, since when they have measured my range in PT it hasn't seemed to improve that much. I have started adding weight to my PT which includes a 2 pound weight, a small hammer and putty. I always want to start singing " Hammer Time " when I start doing the exercises with the hammer. Oh, and I also got the green light to go back to Yoga (modifying poses)! New PT Tools
Post a Comment
Read more 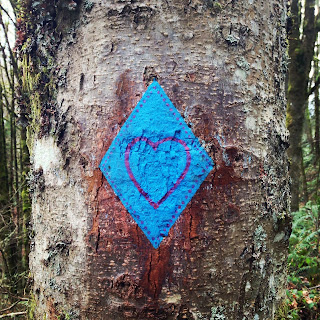 Trail Love The number 23 is a magical number, and not just because I was born on the 23rd.  The  23 enigma  refers to the belief that most incidents and events are directly connected to the number   23 .  This was our longest run of the year (so far), it was fantastic, and I believe it was because it was 23 miles.     We started at the Saltzman / Skyline trailhead. Saltzman intersects right in the middle of Leif and Wildwood, which makes it a great starting point for a long run, you can run the first half of the run one direction and the second half the other direction. Which is exactly what we did. You also get the bonus of a picnic table at the intersection of Leif and Saltzman. We were really excited to have a place to sit and rest for a few minutes while we had our snacks, but when got to the table there were a bunch of cyclist hanging out. They must of recognized the look of desperation on our faces, because they moved for us.   The weather was great. Even the mile+ hill
Post a Comment
Location: Neighbors West - Northwest, Portland, OR, USA
Read more

20 miles, pretty toes, treats, but not in that order 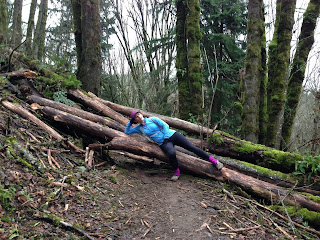 If runners had mud flaps they would look like this.  I am easily convinced to hang out with Susan and Amber, even if it means getting a pedicure the day before we go on a 20 mile trail run. The best part of the pedicure was the paraffin foot wrap-- I don't think my feet have been so soft since I started running. I was sure that the pedicure was no match for the muddy Pacific Northwest trails, but I was wrong! Post run and shower, toes are still pretty! I sure don't look like I have ultrarunner feet.  Before I broke my wrist, Susan and I had been talking about how we needed to start coming up with our own running treats. GU and gels get expensive and really don't taste that good. We also found ourselves taking chips and cookies as treats for longer runs. While it is nice to have an excuse to eat junk food every once and awhile, we knew we could come up with something just tasty but healthier.  Now that I have a little bit more mobility with my wrist and can
Post a Comment
Location: Holman Lane, Portland, OR 97210, USA
Read more

What ever happened to Maple Trail? 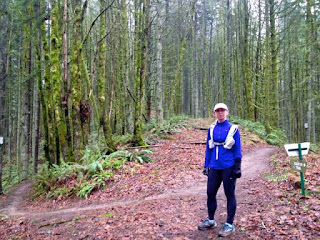 Ann's broken wrist is coming along and it wasn't icy, so she planned a loop route instead of an out-and-back-- meaning hills! She also included the long section of the Maple Trail, which we haven't really done in more than a year, since it's been closed. Ann at a bend in Wildwood, about to head down Cleator.  We also went down Cleator, which we usually run (WALK) up. It's steep and nearly as difficult going down as up. When we got down Firelane 4 to the intersection with Maple, there was a big white and orange block, but it was moved to the sign. We went for it. Firelane 4 has an old sign. We finally discovered why Maple has been closed-- a downed and now completely missing bridge. It's long and high up, too. But people have picked a decent path down to the stream and across. As it gets muddier, this little route might erode and become more difficult. It was nice to be on an old favorite trail again, one we haven't run in so long that it's pr
Post a Comment
Read more
More posts