Showing posts from September, 2015
Show all

A flat 20 miler and a newly closed trail 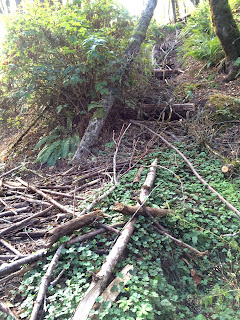 Still recovering somewhat from our Mt Hood circumnavigation, I went back through the blog looking for 20 mile routes and found one that was as flat as I could make it. Whoopie! This trail is CLOSED As we ran down Gas Line, the main, sketchy-ish trail straight down to Leif had a big branch across it. We decided to follow the little, unobtrusive sign to the left, pointing "to Leif Erikson." That trail has had lots of work recently. They're obviously revamping it to be a nice, new, switchbacking and gently descending replacement for the other. When we got to Leif and passed where the old trail joined, we were greeted with a surprising sight: the whole thing had been filled in with branches. That trail is definitely closed! We decided to deviate from the route after Maple, because 2 1/2 miles on Leif just sounded like too much. Instead, we continued up Maple to Wildwood. We did some quick trail-math and realized that the overall mileage would be just about the same.
Post a Comment
Read more 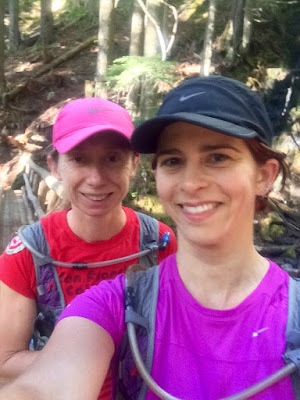 Selfie at Ramona Falls It was time to truly run all the way around Mt Hood. Two years ago we mostly did it, but due to difficulties at the Eliot washout and getting lost around Eden Park, we exited at Ramona Falls instead of making it back to our car at Timberline. Coming off a glorious circumnavigation of Mt Rainier in August (post coming soon), we felt ready. Well, almost ready. We pushed back our planned September adventure run by a week to accommodate work, and it definitely helped to have an additional week to rest from Rainier. First view of the mountain as the clouds lift Unlike last time-- when we planned and meticulously packed for our very first mountain circumnavigation-- this time felt relaxed and casual as we tossed together our trusted gear and favorite eats. We spent the night at Ann's mom's house and drove up to Timberline in the early morning, leaving on time (!). It was cold and dark at our 6:30am start, and the lodge wasn't open yet. T
2 comments
Location: Mt Hood, OR 97041, USA
Read more
More posts