The King of Trails 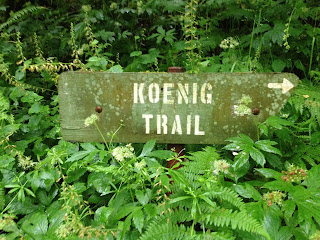 Susan was sick this week, so it took me a bit of motivation to get myself out the door to run by myself. I hadn't really planned a route, I knew I wanted to at least do 10 miles, and ended up settling on Leif -> Maple -> Wild Cherry. The first ~4 miles up Leif Erikson didn't feel that great, I kept thinking I would just turn around when I hit Maple. Somehow I zoned out and missed Maple and ended up around the 4.5 mile marker on Leif at the Koenig trail. Instead of turning around and going back to Maple I thought it was appropriate to take the Koenig trail, since John was in Germany and has been pestering me to learn German (Koenig is King in German). Koenig was a lot shorter than I remembered, I was on Wildwood in just a few minutes. As soon as I started running on Wildwood, I felt great, all the right songs came on, the miles past by. I ended up running to Aspen to get back to the car, which I think ended up being 13 miles. My pace was at least a minute faster than when I run with Susan on the trails, but I would rather run with her than solo and faster.
forest park trail running wildwood