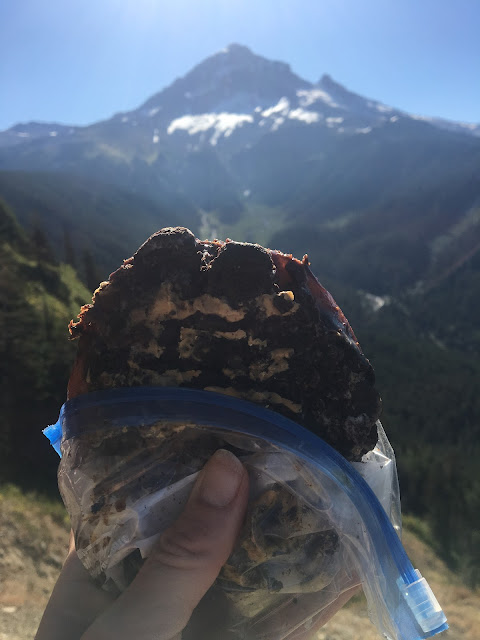 
David and I went back and forth on a few route ideas and finally landed on one of my favorite routes, the Bald Mountain - Ramona Falls loop with the addition of an out and back on Yocum Ridge. The climb to Bald Mountain and Yocum Ridge satisfied the 2 3000 foot climb requirements, even though it was more like 2000 feet and 4000 feet and the route would probably take us 6 - 7 hours to complete.

David and I had planned to meet at the Ramona Falls trailhead around 9 am on Saturday, since I was staying at my mom's house which is 15 minutes from Ramona Falls, but at 6 am on Saturday David texted and asked if we could meet at 8. I was happy to meet earlier, which is the opposite of most Saturday mornings where Susan is 15-30 minutes late.

David arrived right on time and popped his trunk open and asked me which of the four doughnuts I wanted. We were seriously going to eat doughnuts for 24 miles. I don't really like doughnuts, but it was his birthday, so I picked the peanut butter and other stuff doughnut.

This was David's first time on these trails and I was eager to show him some of my favorite spots around Mt. Hood.

As we started down the Ramona Falls trail towards the Sandy River we both commented that we were feeling a little out of breath even though we were only at ~2500 feet. The bridge over the Sandy River has been out for several years, but we had no problem crossing over a large log that has been in place since the bridge went out. From there we made our way up the PCT to Bald Mountain for our first doughnut.

I thought I had hiked Yocum years ago, but as we made our way up the ridge I wasn't sure I actually had. It's a long ~5 miles to the end of the trail, but the trail is really nice and I was really looking forward to running back down it. When we finally made it to the top of Yocum Ridge, it was of course time for another doughnut to enjoy the view with. As we were eating David said that he didn't think we were at the top because we saw people coming down a trail towards us. I knew he was right but I didn't want to admit it, I looked at the map on my phone and told him I was pretty sure we were at the top. I am normally the one who likes to run uphill, but I think the heat was starting to get to me or maybe it was the doughnuts.

As we started back down Yocum ridge I asked the hikers we saw heading down the hill above if we were at the top of Yocum, they said we weren't. Damn false summits! So we turned around and headed back up to real top of Yocum. Once we reached the top, we had views of Mt. Adams, Mt. Rainier, Mt. St. Helens and of course Mt. Hood. Once more doughnut bite and we head downhill for 9 glorious miles, passing Ramona Falls and back to the car.