We took last Friday off to have a long over due running adventure. We knew we didn't want to run in Forest Park, we do that ever weekend, and we didn't want to run on the Oregon side of the Columbia Gorge. With the snow levels still pretty low that only left a few other options. We had our mind set on the Oregon Coast trail around Manzanita. But as it got closer to Friday the weather forecast for the coast was 100% chance of rain. We debated a few other options and landed on Beacon Rock State Park.

I decided to combine two classic routes in the park Hamilton Mountain and Hardy Ridge to Phlox Point. We started at the equestrian trailhead, which is the starting area for Hardy Ridge. We decided to run up to Hamilton Mountain first knowing it's a more popular route and thought we could avoid some of the crowds. No matter how many times I run up Hamilton Mountain I get fooled by a few almost false summits. Susan actually did this time. I had Cedar pulling me up the hill so she was a bit behind me and took a fake trail to one of the false summits and had to scramble back to the real trail. Do not do this.

After reaching Hamilton Mountain we headed along the ridge to the saddle, where we decided to continue on the Upper Hardy Creek Trail which eventually led us to Bridge Trail. There is quite an impressive bridge on Bridge Trail. From there we followed the normal Hard Ridge loop. We were awarded awesome views at the top of Phlox Point, which is the highest point on the route at ~3000 feet. Phlox Point is called that because the summit is capped with pink phlox blooms in late spring / early summer, but we were a little bit early for that. From there we continued back to the car. 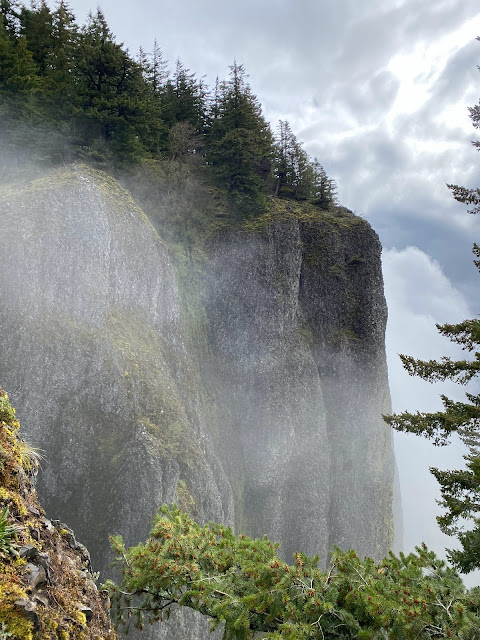 It was another near perfect day off run, well except for Cedar and the horses, but that is another post (which will probably never happen).

My strava of the route.