We couldn't of asked for better weather, it started out cool and sunny and when we finished it was around 70°F. After our very, very wet North Face 50k, we were ready for a race with good weather.

The race started at Benson State Park, we ran out of the park on a grass path to the trailhead to Wahkeena Falls. This is where our 2 mile, 1600 foot climb started. It was hard to get a consistent pace since the race hadn't thinned out yet and we were on single track. We ended up walking a lot of it, but we also didn't want to burn ourselves out in the first few miles.

Once we reached the top we headed east on the Wahkeena Trail, which we were very familiar with from our epic-26-mile-run-out-of-water-run last summer. We had a nice 2 miles downhill, and then we were on rolling, rocky, single track. It felt good to let our legs stretch and run for awhile, but we did stop and take photos at almost every waterfall. Around mile 12 the trail ended and we ran on the road for around 2 miles, I don't think either of us expected to be on the road for that long, it felt much longer than 2 miles, especially when we turned around and headed back. At the end of the road was an aid station and my car (John was hiking). From the aid station we headed uphill for about a mile to the final waterfall, Elowah Falls and our turn around point. We grabbed our poker chip and headed back.

We changed our shirts and left our stinky shirts and running sleeves on the car for John to deal with when he returned from his hike. (I'm not sure why he puts up with me.)  We hung out at the aid station for a bit and headed back.

Once we got to Multnomah Falls, we headed up the paved path of never ending switch backs. There were a lot of hikers and tourist,  I thought they were going to be annoyed with all the runners, but a lot of them were cheering us on. Once the paved path ended we were on the trail that leads up to Larch Mountain, where Susan bonked last year. Luckily that didn't happen this time, but I did run ahead of her, since I really do like trying to run the uphills. She caught up with me and kicked my ass on the downhill back to Benson State park.

We crossed the finish line happy and ready for beer! The post race party included pizza baked in a portable pizza oven. They were happy to make a vegan and vegetarian pizzas for both of us. Also standing next to the pizza crew was Hal Koerner, but I was too much a wimp to go ask him to take a picture with me, instead I took a stalker photo.

After we inhaled our pizzas we headed to Double Mountain for more pizza and beers with John, Erik and Leif.

More of our pictures.

Some of our Waterfall Self Portraits 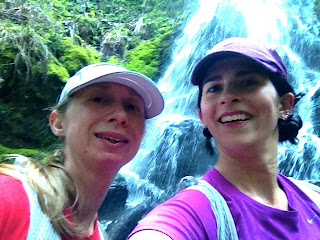 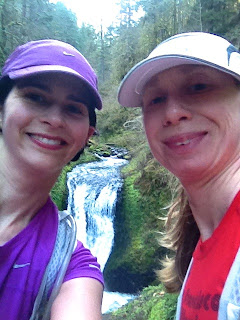 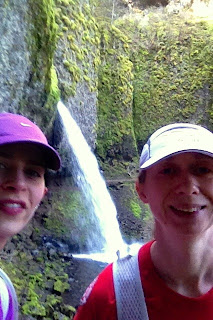 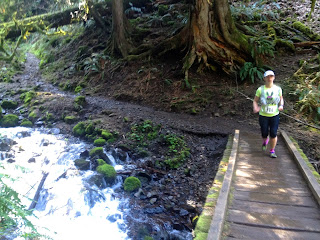