By Ann Wallace - January 10, 2016
We flew in and out of Austin for my sister Gretchen's first 50k (Bandera), and after the event on Saturday we spent the night in the city. I hadn't been to Austin in 15 years, and Susan had never been there, so first on our agenda was exploring some of the trails downtown. I knew that I wanted to go to the big waterfront trail along the Colorado River, so I looked at Google Maps and found the Shoal Creek trail not far from the house we rented. 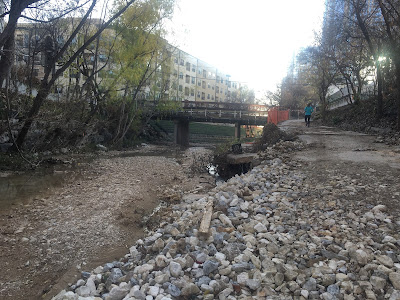 It was cold (30 degrees) and we crossed the street to find the trail right away, only to be disappointed when it suddenly ended in a neighborhood. We stopped to navigate our way back to it, and enjoyed its strange meandering along the creek, under bridges, connecting parks. At one point we took a left at a fork and the path just stopped in a dirt bike park. We went back and followed the trail the other way for a short time before it ended with the pavement cut away in a sudden drop-off. Luckily, large rocks dotted the water right there, so we hopped across the creek. A little farther, the path ended again in a downhill of gravel, which we used to cross back, run up a concrete ramp, and hop over some construction barricades.

From there we ran the downtown streets to the river, and were greeted by the sight of so many runners of all types enjoying the wide, mostly dirt path. It was beautiful to run along the river with the sun low and rising, illuminating the city as the residents awoke. We ran out to a good little climb, then turned around and mostly retraced our steps, this time confident of our route. It was a nice little shakeout and we got back before everyone else, so we got to take our time with nice, hot showers.

We spent the rest of our time in Austin listening to Willie Nelson, eating Texas influenced vegan food and trying Austin's mircobrews. We will be back.

“I enjoy running around Austin. I enjoy going downtown and running on the rivers and lakes down there, and you see just loads and loads of people doing it every single day. There’s not a more beautiful place to run and Austin has so many great roads and trails.” – Willie Nelson, courtesy of Still is Still Moving.